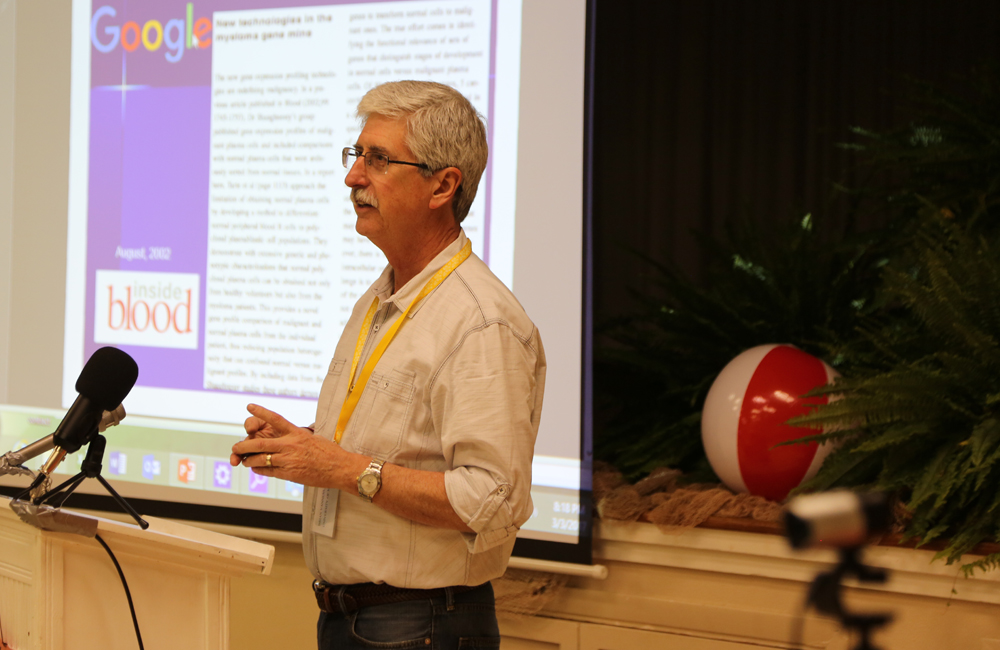 Dr. Van Ness stressed his key point: We need to better understand the individual and their own tumor so we can treat myeloma with an individualized approach. He described the new technologies in myeloma that is making this dream a more certain reality:

Can doctors treat myeloma patients individually? Dr. Van Ness says that the answers will lie in understanding the genetics. The human genome has a string of 3 billion codes and 99% of that code is the same for every living human. The variety in the 1% may seem like a small number, but this also means that over a a million genes could potentially be different. In 2001 the first genome was mapped and published – it took 11 years and 3 billion dollars. Today, mapping a genome takes one day and costs less than $1000. Dr. Van Ness believes that it will cost $200 in 2010 through massive parallel sequencing that is now available. The Study of Myeloma Genetics Future study  about genetics will answer questions like:

If a patient has a genetic mutation, can it be fixed by “editing” the DNA? Dr. Van Ness cited the up-and-coming technology of gene editing and noted that it was Science magazine’s 2011 “Method of the year”. In order for this to work, he notes that you would need a guide system to hit the target, it would have to hit the right target, it would need to be efficient and sustaining and should not cause “off-target” problems. Gene editing was used in a 2003 French clinical trial for children. The FDA stopped 27 gene therapy trials because the gene editing caused leukemia in about half of the children. So it is a technology that needs to be carefully used. A new technology called CRISPR (Clustered Regularly Interspaced Short Palindromic Repeats) and CRISPR-associated (Cas) genes are essential in adaptive immunity in select bacteria and archaea, enabling the organisms to respond to and eliminate invading genetic material. These repeats were initially discovered in the 1980s in E. coli, but their function wasn’t confirmed until 2007. Recently, a new tool based on a bacterial CRISPR-associated protein-9 nuclease (Cas9) from Streptococcus pyogenes has generated considerable excitement, according to a recent article in the New England Journal of Medicine. Using these tools, researchers were able to pull out certain pieces of these to get new DNA in without additional side effects. The research was performed both at UC Berkley and at the Broad Institute. This “DNA surgery” precisely locates the gene to correct using a guide system to correctly target it. The CRISPR technology is specific, quick, not off-target and you can buy a kit online to knock out a gene or knock in a gene. The first human trial in CRISPR is being performed by Dr. Carl June at the University of Pennsylvania and by Chinese scientists. Dr. June' s goal is to amp up the immune system to attack cancer. The trial planned for 2017 will include 18 patients with three types of cancer (myeloma, sarcoma, and melanoma). The T cells of a patient will attack their own tumor. Mouse Avatars Another technique using myeloma genetics is the creation of a mouse avatar that has the same genetics as an individual patient. Drugs can then be used on that mouse avatar to see if there is impact. Interestingly, Dr. Van Ness said that it is most difficult to test immunomodulator drugs like lenalidomide on mouse avatars because iMiDs are dependent on cereblon and mouse cereblon is different than human cerablon. One investigator, Dr. XX has found a way to inject human cerablon into mice in order to use the mouse avatars, which is just an example of the many talented researchers that exist in the field of myeloma Immunotherapies Immune therapies like daratumumab and elotuzumab were approved in November of 2015 and are now being combined with standard myeloma therapies like the proteasome inhibitors and iMiDs. As a whole, myeloma genetics will offer approaches that are more specific, individualized, effective and sustained as well as less toxic. More importantly, they could easily lead us closer to a cure.