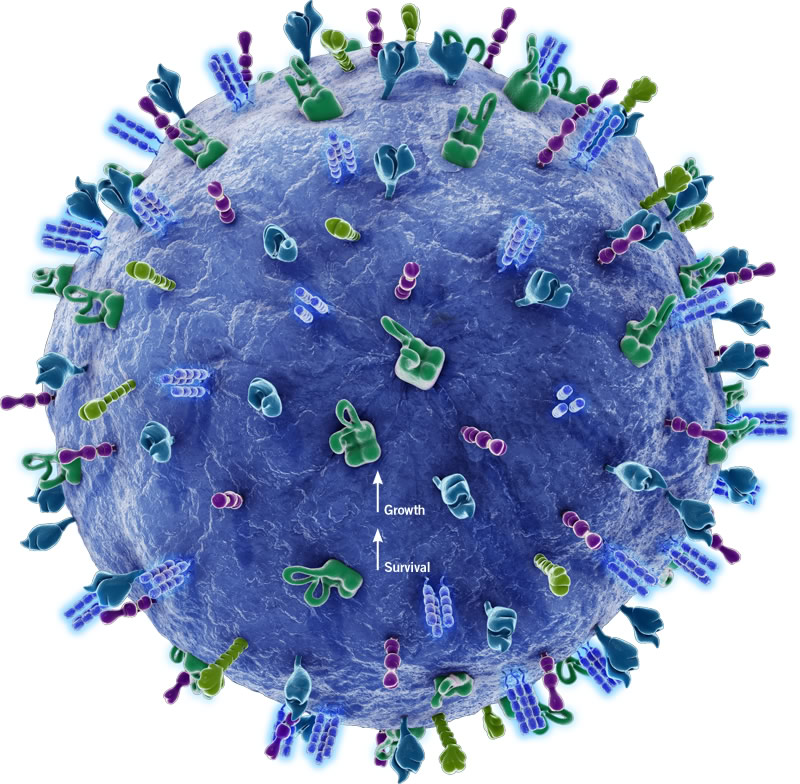 Daratumumab Plus Standard Treatment Improves Outcomes in Relapsed, Hard-to-Treat Multiple Myeloma in Phase I Study An Open-Label, Multicenter, Phase 1b Study of Daratumumab in Combination with Backbone Regimens in Patients with Multiple Myeloma

A new class of drugs called anti-CD38 antibodies target multiple myeloma cells by binding to an antigen (CD38) expressed on the myeloma cell and then signaling the patient’s immune cells to attack myeloma cells. Daratumumab, one of three anti-CD38 antibodies under investigation for multiple myeloma, has been reported in early trials to be effective and relatively safe as a single agent in patients with relapsed or treatment-resistant disease. Given these positive results, researchers hypothesized that they could potentially improve response rates for these patients by adding daratumumab to already-proven treatment regimens.

To study the safety, tolerability, and appropriate dose regimen of daratumumab in combination with standard treatment, researchers enrolled patients with newly diagnosed, relapsed, or treatment-resistant multiple myeloma in a multi-center trial in which they received daratumumab with one of four standard regimens. Standard regimens included bortezomib-dexamethasone (VD), bortezomib-thalidomide-dexamethasone (VTD), bortezomib-melphalan-prednisone (VMP), and pomalidomide-dexamethasone (POM-D). After median treatment duration of 44 days, tolerability assessments for 17 patients in the newly diagnosed multiple myeloma group receiving a bortezomib-based regimen (VD, VTD, or VMP) indicated that patients experienced no additional toxicity. Four patients experienced infusion-related reactions associated with daratumumab; however, this did not interrupt treatment. All other adverse events were consistent with those accompanying standard regimens. Preliminary data demonstrate a high patient response rate to this new therapeutic approach. Efficacy and safety assessments in the trial are ongoing and will be presented at the meeting.

“This is a very new and exciting concept in multiple myeloma, as we are seeing that combining this precision approach with the standard of care is leading to more effective treatment without increased toxicity,” said lead study author Philippe Moreau, MD, of University Hospital of Nantes in France. “By targeting a simple molecule expressed by the cancer cells, this therapy has the potential to become a potent addition to conventional treatment.”

SAR650984 (SAR) is another anti-CD38 antibody that has shown single-agent activity in Phase I testing among heavily pre-treated myeloma patients. In this Phase Ib trial, researchers added escalating doses of SAR to a standard regimen of lenalidomide and dexamethasone in patients with relapsed or treatment-resistant multiple myeloma.

The goals of this study were to identify the maximum tolerated dose of SAR in combination with lenalidomide and dexamethasone, and to assess preliminary efficacy of the regimen. Thirty-one patients with relapsed or treatment-resistant disease were enrolled, with 13 patients receiving escalating doses of SAR650984 and 18 patients receiving the highest dose. After a median of nine months of follow-up, 58 percent of patients responded to treatment. Progression-free survival was 6.2 months. The response rate was slightly higher in patients receiving the highest dose of SAR. Responses were observed in patients who had previously relapsed or demonstrated resistance to lenalidomide or other similar drugs (called immune modulators). While no increased toxicity was observed, the most common adverse events reported included mild fatigue, nausea, diarrhea, blood count suppression, and upper respiratory tract infection. Two patients discontinued treatment due to infusion-associated reactions.

“The addition of this antibody made a significant difference in outcomes among these patients, even among those who had previously relapsed or did not respond to initial therapy with immune modulator drugs,” said lead study author Thomas Martin, MD, of the University of California, San Francisco. “Our next steps are to further evaluate even higher doses of the antibody and to perform a randomized study in the hopes of showing that treatment with the antibody plus immune modulator drugs is better than treatment with immune modulators alone.”

Suzie Rose wrote a helpful post about how these monoclonal antibodies work here.