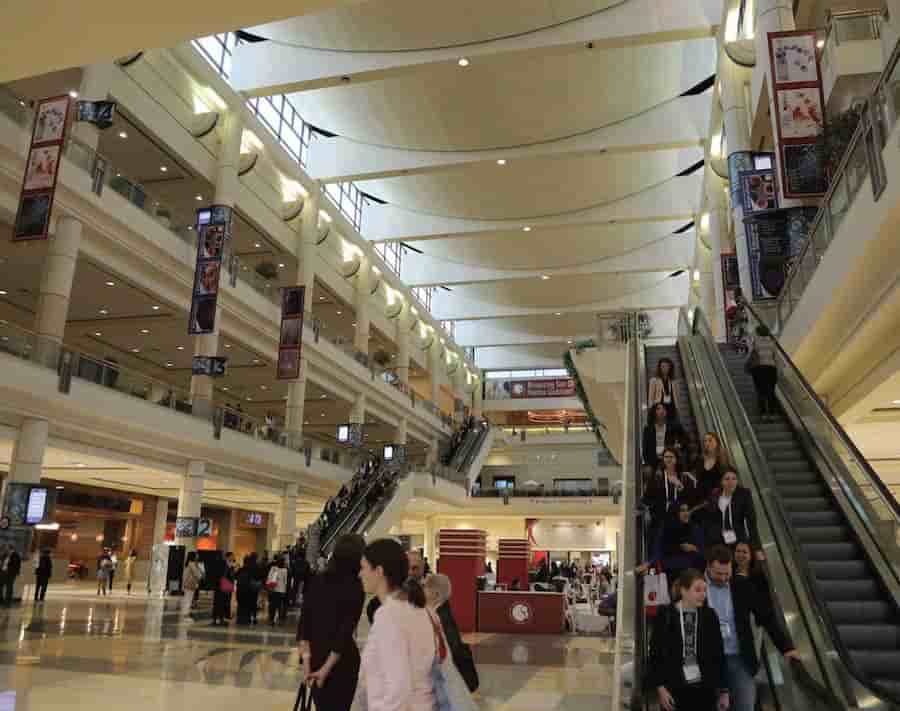 On the final day of ASH there were many presentations of four-drug studies where daratumumab has been added to backbone triplets for newly diagnosed, transplant-eligible patients.  Daratumumab is a CD38 monoclonal antibody that binds with the CD38 receptor on myeloma cells.

Here we look at two studies, one that is already generating change in the standard of care for newly diagnosed patients.

The verdict is in on the Griffin Study: responses get deeper for newly diagnosed patients using daratumumab, lenalidomide, bortezomib and dex (Dara-RVd). Dr. Peter Voorhees, the Principal Investigator of the Griffin study, provided a 22.2 month update on this Phase 2 trial comparing first treatment of bortezomib, lenalidomide and dex (also called RVd)  vs. the four drug combo (Dara-RVd).

The Griffin study had a total of 207 patients and met its primary endpoint of an improved stringent complete response rate by the end of consolidation for Dara-RVD (42.4%) vs. the triplet arm (32%).  This improvement was observed in all patient subgroups except for small subsets of ISS stage III or high-risk cytogenetic risk patients.  Throughout induction, transplant and consolidation, responses continued to deepen.

After the stem cell transplant and consolidation, patients who achieved complete response and were measurable disease negative (MRD) included 59% of patients in the Dara-RVd arm vs. 24% of patients in the RVd arm. It is important to note that the study is not mature enough to show an increase in Progression Free Survival, but as Dr. Voorhees pointed out this has been seen in every other study that has compared the addition of daratumumab to a backbone and he does not see why that wouldn’t be seen here.

The addition of daratumumab did increase the rate of grade 1/2 upper respiratory infections as were cytopenias (low blood counts).

Below is the Emory treatment algorithm: 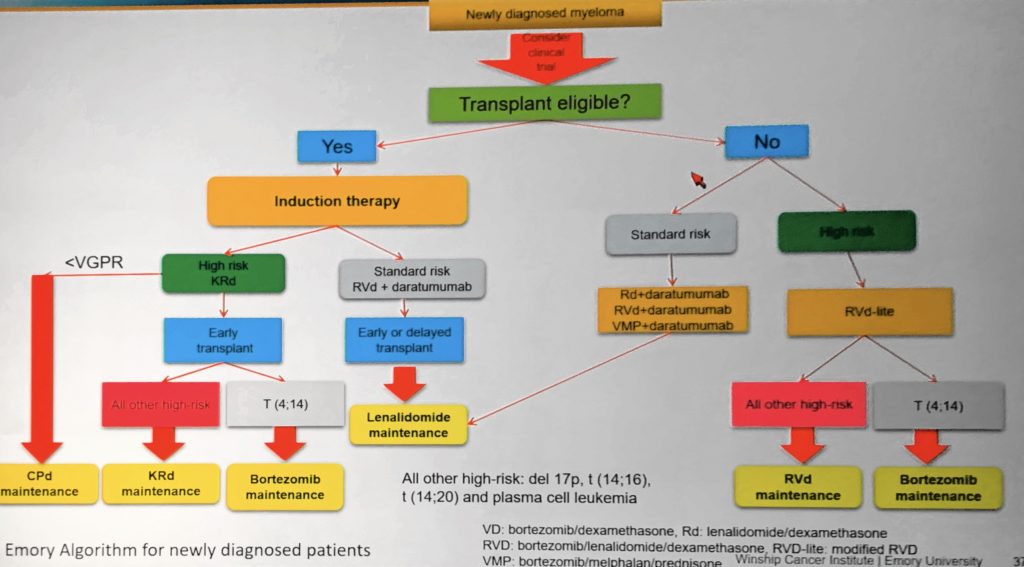 In conclusion, the quad combo including the daratumumab deepened responses and improved response rates and it didn't impact the ability to collect stem cell transplants.  Now, the PERSEUS study is studying daratumumab as an under-the-skin shot instead of an IV administration.

Let’s start with the conclusion: Among patients evaluable for the MRD primary end-point, in the absence of a transplant, the MRD negative rate was 77%.

This is a two-arm, Phase II clinical trial based on Simon’s optimal two -stage design with Daratumumab plus Kyprolis, Revlimid and dexamethasone (Dara-KRd). All patients received 8 cycles. Both arms use the same dose of Daratumumab, Lenalidomide, Dexamethasone.

Importantly they were able to collect more stem cells if the stem cell collection was completed after 4 cycles of the combination, rather than later on in therapy.

All patients with more than a very good partial response (VGPR) were assessed with measurable residual disease (MRD) testing and targeted DNA sequencing. Almost half (49%) of the patients were High Risk.

And here are the stunning results:

For patients (24) who completed all 8 cycles of treatment, the results were also impressive:

And here are the safety and adverse events data. 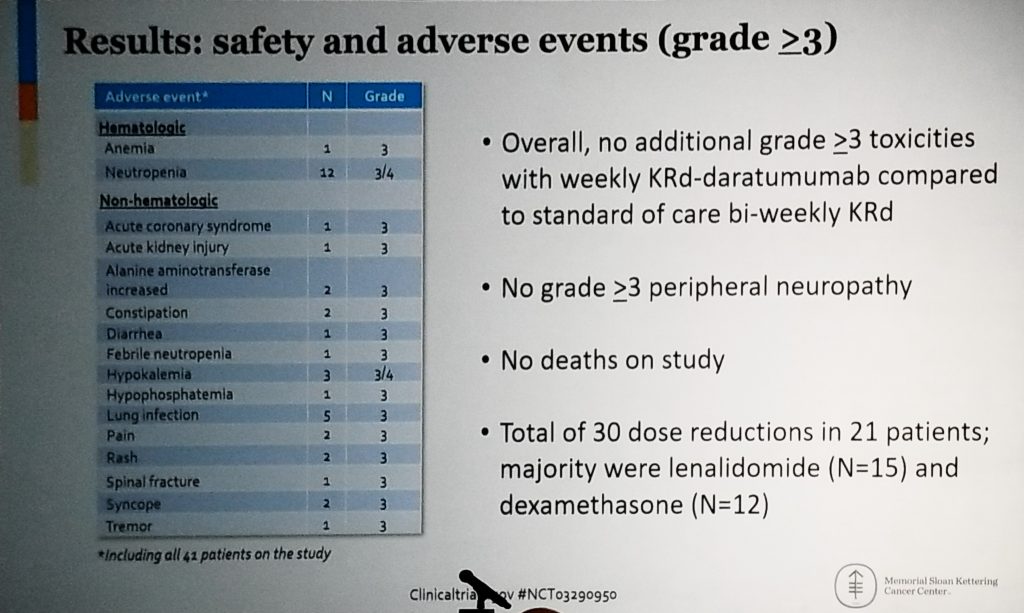 Dr. Landgren completed his talk inviting everyone to do a cross study comparison together, since everyone does this anyway (even though they are not supposed to).  He also announced that based on this work, a phase III study will be opening very soon! 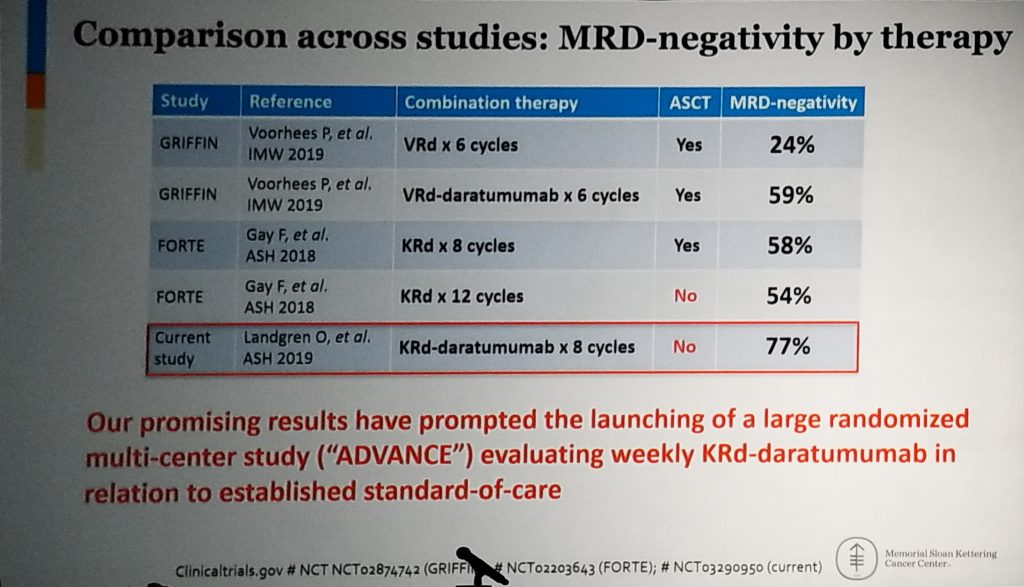 I hope the results of these studies are not only exciting and encouraging for myeloma patients, but they will encourage you to consider participating in a clinical trial.  Clinical trials provide access to cutting edge treatments and outstanding care.