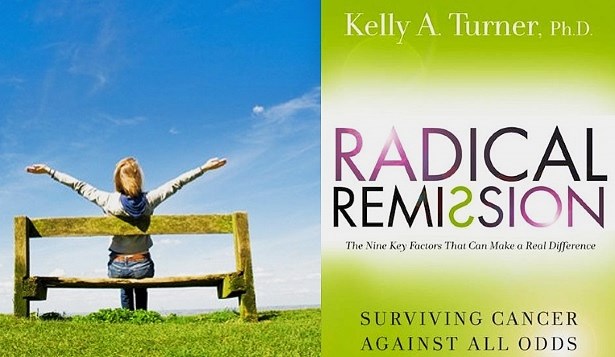 Kelly Turner is a psychotherapist who specializes in integrative oncology. She has a master’s degree in social work in the field of counseling for cancer patients. During her PhD work, she studied spontaneous healing, which she calls “radical remission”.

Her book, Radical Remission, The Nine Key Factors That Can Make a Real Difference, is a summary of the findings from her PhD work (and beyond). It outlines the nine key factors that all of the radical remission patients had in common. She defines “radical remission” as any cancer remission that is statistically unexpected. This can occur when;

From her research she found 75 factors could account for the healing. Nine of these factors occurred with the greatest frequency. Her book outlines these nine factors, which are:

Based on my experience in teaching people how to thrive after cancer, these findings are all in alignment with my recommendations. Reading this section of the book was reassuring that the published evidence I use to guide my nutrition recommendations is being confirmed in Turner’s work. If you are not already following these recommendations, then I would suggest that you work towards these goals.

Turner’s overarching goal for her research is to spur on further study of these radical remission cases in the hopes of learning more about the body’s ability to heal itself. I too focus my Thriving After Cancer Coaching and Support Program on uncovering the connections between the immune system, inflammation and cancer. My goal is to help you support your immune system and allow your body to maximize its own healing potential.

Are There Shortcomings in the Research?

I’m not convinced of Turner’s thoroughness in interviewing her subjects. I would have liked more detail about how much investigation she did into the stories of the survivors. In her introduction she states she “conducted over a hundred direct interviews and analyzed over a thousand written cases… after analyzing all these cases carefully and repeatedly using qualitative research methods I identified more than seventy-five different factors that may hypothetically play a role…”

There is nothing in this description to satisfy some nagging questions such as:

I think these questions are especially nagging for me, because prior to reading Radical Remission, I read Cancer is a Word, Not A Sentence by the late Dr. Robert Buckman, a well-respected oncologist.

In his book, Dr. Robert Buckman describes how he spent two and a half years investigating “miraculous responses”. He states that “in all of the stories that I investigated, I found everyday explanations that had not been considered, and I think it is important to be aware of the more mundane explanations in order to avoid having hopes falsely raised and then suffering deep disappointment.”

You might accuse Dr. Buckman for being overly scrupulous in his debunking of miraculous claims and at the same time Kelly Turner may be guilty of not looking for “everyday explanations” in her enthusiasm to count her subject among one of her radical remissions. I only wish she had been more detailed in her book to tell me the extent to which she validated the patients claims. She also never mentions whether any of the interviewees were excluded from her analysis as their remission was found to be due to their conventional treatment.

Despite the fact I am not completely satisfied with the detailing of her research method and the extent to which she ruled out other possible cures, I would still recommend this book. I think many of the suggestions included in the nine factors that could account for the healing are good ones—I think they open up cancer patients to new possibilities.

I especially relate to the Chapter 5 Releasing Suppressed Emotions. In my personal experience with cancer, I believe my deep shame was a major contributor to my cancer. I agree with Turner that releasing these harmful emotions is key. I don’t want to just survive after cancer, I want to thrive and for me that means many things including living my life in integrity with who I really am. I would encourage you to explore this as well. Releasing negative emotions such as fear, trauma, regret, anger or sadness is an important part of thriving after cancer. I encourage you to begin this journey. If you want to hear more about my journey with releasing my shame, you can listen to my interview with Tom Coccanga here.

Should A Cancer Survivor Read This Book?

Since seven of the nine key factors Turner outlines in the book are emotional or spiritual in nature, you can implement all of these without interfering with conventional cancer treatments. The other two key factors (changing your diet and taking herbs and supplements) will require more individualized care plan. You should seek guidance from a nutritional professional with expertise in oncology. But don’t let that scare you into inaction—making these changes in your life can be easy and fun! Especially when you are supported by a group of other cancer thrivers who are working toward the same goals! Check out how my Thriving After Cancer Coaching and Support Program can help you achieve your goals here.

I suggest you take a look at my blog post, Book Review: Cancer is a word not a Sentence here.