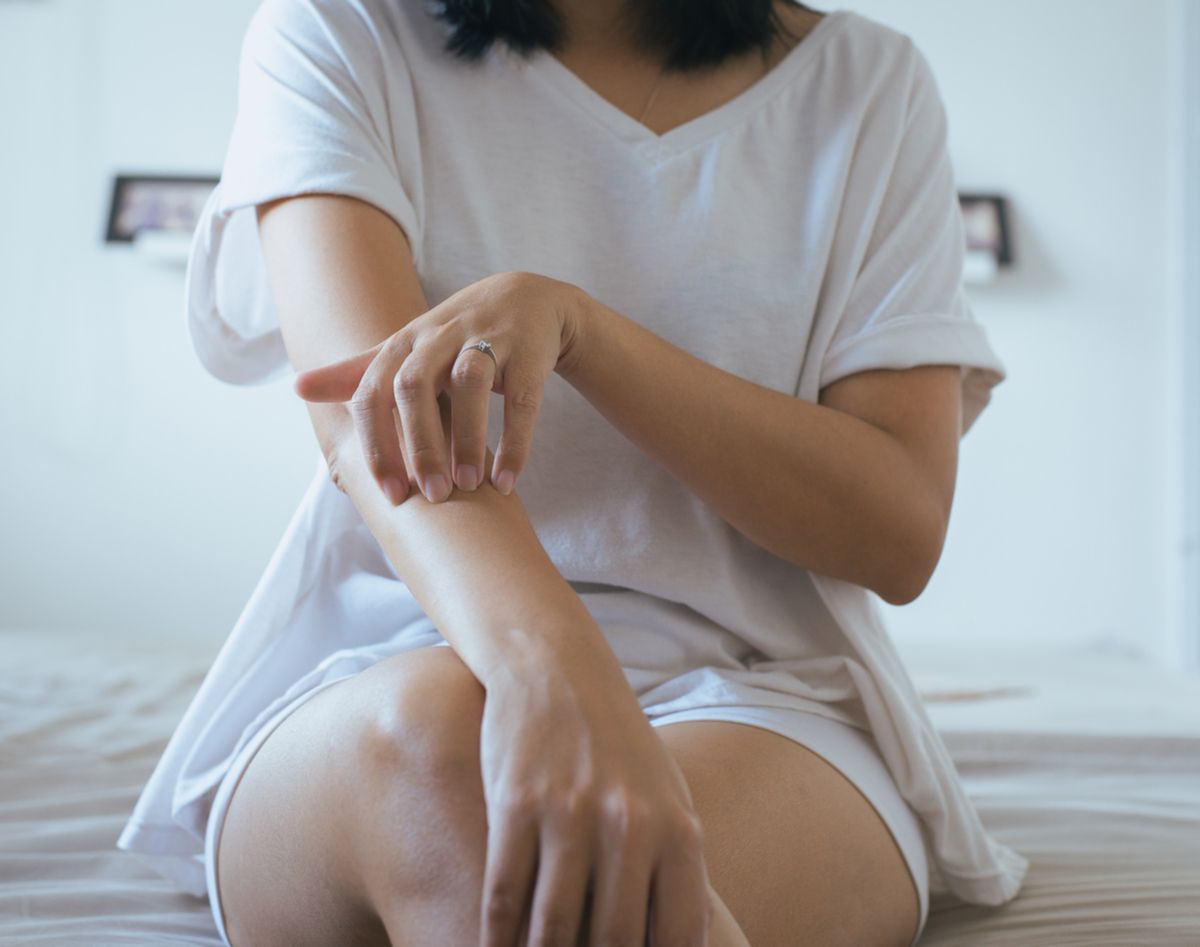 HealthTree Research: The Intersection of Psoriasis and Multiple Myeloma

We are proud to share our first published study from the HealthTree platform! Thank you to all involved patients!

Psoriasis and multiple myeloma are both diseases of the immune system. In HealthTree, we noticed that the largest number (5%) of patients who noted a second immune system disorder had psoriasis. We wondered if psoriasis medication would help or hurt myeloma outcomes and if the reverse could be also true - if myeloma medications might help or hurt psoriasis outcomes.

Psoriasis is a skin condition that affects over 100 million people worldwide, while multiple myeloma (MM) accounts for 10% of all hematologic malignancies in the US. Dr. Liao's concern in treating psoriasis patients who have cancer is immunosuppression and a possible worsening of the cancer. There are inhibitors for psoriasis patients targeting tumor necrosis factor α (TNF-α), interleukin 17 (IL-17), and interleukin 23 (IL-23). But using these agents in patients with blood cancer can be detrimental. For example, elevated rates of lymphoma in patients receiving anti-TNF agents have been reported.

In a case series, the researchers first reported one psoriasis and MM patient treated with the IL-17 inhibitor ixekizumab (Taltz) who demonstrated a temporary, 2-month improvement in MM biomarkers (M-protein, kappa, and kappa:lambda ratio). They then reported on the clinical characteristics of 18 patients with verified profiles on HealthTree indicating concurrent psoriasis and multiple myeloma conditions.

Included in the study were gender, age, psoriasis type, psoriasis treatment history, myeloma type, myeloma genetic features, and myeloma association with bone damage, hypercalcemia, or osteopenia. Four patients were treated with systemic immunomodulators for psoriasis, with responses suggesting that these therapies did not worsen their myeloma progression.

One myeloma patient, diagnosed at the age of 43, obtained a stringent complete response following tandem transplants and two years of consolidation and maintenance therapy. However, at age 48, despite no evidence of active myeloma on imaging, bone marrow biopsy showed 5% presence of plasma cells, which is at the borderline level for MM recurrence. No additional CRAB criteria were identified.

At age 52, the patient had an increase in myeloma biomarkers, including kappa and urine paraprotein. She also developed additional psoriasis and started on ixekizumab therapy. Ixekizumab was selected based on its established efficacy in psoriasis and studies suggesting a pathogenic role for IL-17 in the progression of myeloma. Twelve days following the first injection, the patient developed a severe rash which resolved after prednisone.

The myeloma markers dropped in the first month but eventually returned to prior levels. The ixekizumab was not helpful in treating the psoriasis and was discontinued after two months. 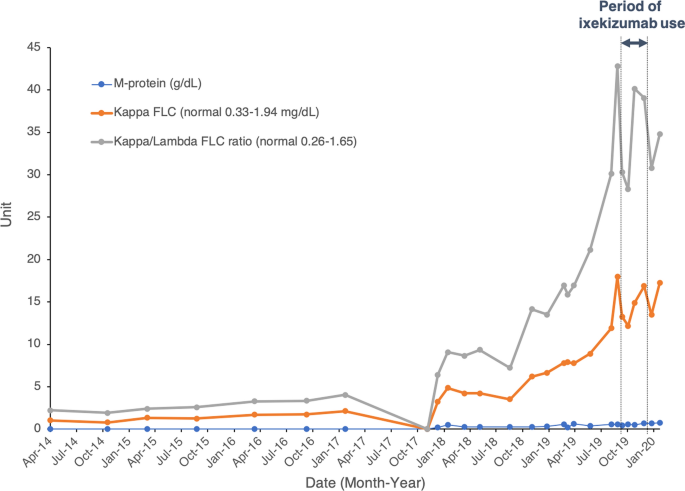 An additional 18 psoriasis/myeloma patients were studied with the following characteristics:

No patients reported that psoriasis treatment had negatively influenced myeloma progression, and 50% were uncertain. Psoriasis treatments were most commonly topical steroids, followed by tar, phototherapy, heliotherapy, and anti-fungal or immunosuppressive agents. The researchers were most focused on those who were receiving treatments for their psoriasis that could change the immune system. According to the researchers:

Out of all respondents, Patients 1, 6, 10, and 16 had received treatment with systemic therapies: ixekizumab (anti-IL17), apremilast (anti-PDE4), ustekinumab (anti-IL12/IL23), and certolizumab (anti-TNF), respectively. These four patients affirmed that systemic psoriasis treatment did not worsen their initial MM, with two patients demonstrating temporary or unclear improvement in MM control following systemic therapy. No other differences specific to this subgroup of patients were found.

There have been no prior psoriasis / myeloma studies to date. This case series gives important insights for patients with a dual diagnosis of psoriasis and MM. Researchers noted:

Epidemiologic studies have shown that psoriatic patients have elevated risks for the incidence of certain cancers such as lymphoma, possibly due to chronic inflammatory processes [8]. Regarding MM, a study of > 890,000 psoriasis patients and 4.4 million age- and sex-matched controls showed an elevated incidence of MM in psoriasis patients (HR 1.26 [95% CI 1.07–1.48]) [9]. Moreover, the use of certain systemic immunotherapies for the management of psoriasis may increase the risk of cancer. For example, use of anti TNF-α biologics has been associated with increased non-melanoma skin cancer rates, particularly for cutaneous squamous cell carcinoma [10]. Several immunomodulators and biologic therapies for psoriasis currently exist, including but not limited to adalimumab, etanercept, infliximab, certolizumab, tildrakizumab, guselkumab, risankizumab, ustekinumab, brodalumab, ixekizumab, and secukinumab. While the literature has not reported on the use of biologic therapies for the specific management of psoriasis in patients affected by MM, the use of these biologics has been studied in MM patients with other diseases of immune etiology, including Crohn’s disease and rheumatic arthritis. In two case studies of MM patients with Crohn’s disease, neither adalimumab nor infliximab worsened MM symptom severity, while etanercept used for rheumatic arthritis was non-significantly associated with reduced risk of MM in a retrospective case-control study [11,12,13]. No other studies examined the use of biologics for psoriasis in patients with MM, pointing to the need for additional research on immunomodulatory biologics in patients with psoriasis and MM.

The researchers also noted that significant research has been performed on IL-17 in multiple myeloma.

Although the first patient had only temporary improvement in her MM biomarkers after starting ixekizumab, it will be interesting to determine whether IL-17 blockade is beneficial in blocking the progression of these malignancies and whether such therapy can be safely used in the setting of psoriasis or other anti-IL-17 approved conditions such as psoriatic arthritis and ankylosing spondylitis.

The researchers noted that the crowdsourcing platform, HealthTree.org was instrumental in gaining these insights.

HealthTree is a powerful tool that enables the clinical study of health data from myeloma patients who are also diagnosed with other conditions, including psoriasis. This case series is an example of how crowdsourcing can facilitate the easy collection of deidentified clinical data of patients across the globe to enable research and analysis for accelerated treatment findings and practices. For instance, the prevalence of psoriasis and myeloma is between 0.91% and 3.15% in the US, respectively, and the co-occurrence would have been even rarer, but HealthTree allowed us to quickly reach our target demographic for clinical study [17]. This includes the gathering of valuable clinical characteristics—for instance, our study reports that patients generally develop psoriasis much earlier than MM with an average difference of 21.2 years in time of diagnosis, which has implications for close monitoring of psoriasis therapies given new malignant diagnoses.

The researchers concluded that more research on IL-17 is warranted for both diseases.

Beatrice - I have MGUS and was diagnosed about 15 years ago, at the same time I also developed Psoriasis...thank you for the most interesting article