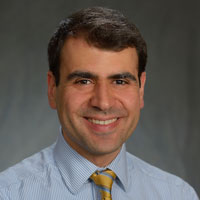 Thanks to our episode sponsor, Takeda Oncology Dr. Alfred Garfall, MD, MS University of Pennsylvania Interview Date: July 21, 2015 Summary Training CAR T cells to seek and destroy specific proteins on the surface of multiple myeloma cells (and the cells themselves) are an exciting new area of study. Dr. Alfred Garfall explains how the work began in leukemia and lymphoma and is now being tested in multiple myeloma. It is a strategy that hails from the same philosophy as the allo (donor) transplant - embolden the immune system and arm it with enough power to fight off the myeloma. Dr. Garfall of the University of Pennsylvania describes how CAR T cell therapy works and how the first target of CD19 was used in combination with autologous stem cell transplant. Used for patients who had already relapsed after transplant in a clinical trial of 10 patients, he shares the mixed results to date with one del 17 patient that never achieved complete response (CR) in the first transplant, achieving it in the second transplant with the addition of CAR T cell therapy. Dr. Garfall explains how this is completely personalized treatment and how additional protein targets are now being considered. Dr. Garfall shares the growing interest in additional targets and an upcoming clinical trial targeting BCMA.    The Myeloma Crowd Radio Show with Dr. Alfred Garfall, MD, MS

Conquer Magazine: How Real-World Evidence Has the Potential to Shape Real-World Outcomes in Multiple Myeloma