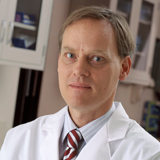 Dr. C. Ola Landgren, MD, PhD, The National Cancer Institute Interview date: August 2, 2013 Summary On this week's show, we learned from Dr. Landgren that new tests in flow cytometry are available that can detect minimal residual disease (MRD) and help us gain more insight into our personal type of myeloma, but that there is a 100x variation factor in the result depths of these these tests, even in myeloma clinics within the United States. Asking the right questions of your doctor and the lab where your work is performed is critical to the understanding of your disease and its accurate diagnosis. We learned how imaging studies like MRIs can give us significant information about the biology of myeloma cells in addition to the flow cytometry tests. He discussed the profile of the MGUS patient and how smoldering myeloma needs to be separated into more specific groupings to be accurately diagnosed and treated. He described his "blueprint" for a myeloma cure and his work on the Black Swan Initiative in asking the appropriate questions that need to be answered to find a cure. He believes a cure can be found if we assume that it can be, and if we ask the right questions that drive to greater discoveries, beginning with more detailed diagnostic work at the molecular level and in early stages of myeloma. The live mPatient Radio podcast with Dr. Landgren https://www.blogtalkradio.com/mpatients

Listen to internet radio with mpatient on BlogTalkRadio
Full TranscriptJenny: