Tell your musician friends to donate a song today on Songs For Life to raise funds for multiple myeloma research! Dr. Irene Ghobrial, MD, PhD Dana Farber Cancer Institute Interview Date: October 30 Summary Dr. Irene Ghobrial, MD, PhD of the Dana Farber Cancer Center shares several new compounds that make the bone marrow microenvironment unfriendly to myeloma cells so they can't attach to bone, preventing painful bone damage. A new inhibitor by Noxxon blocks this growth by stopping SDF-1. Dr. Ghobrial describes how this works and shares that it is the first time a bone marrow environmental drug has shown great effect for a low tumor burden of myeloma cells. She shares a new center at Dana Farber called the Prevention of Progression for MGUS and smoldering myeloma patients with the goal to prevent disease progression and the discovery of a cure. She gives a preview of a way Dana Farber is approach this very small disease community of MGUS and smoldering myeloma - to offer future crowdsourcing blood and bone marrow samples, so that any patient at any location can donate their tissue samples in order to make discoveries for these early stage disease states. Another study will open soon at Dana Farber for high risk smoldering patients using elotuzumab and Revlimid. Her ultimate goal is to understand if smoldering patients achieve a cure if treated early enough. She explains another drug, similar to the Noxxon SDF-1 inhibitor called Plerixafor, which is called a CXCR4 antibody. It has similar activity and is being used with Velcade so the myeloma cells can't hide in the bone marrow. She also shares another clinical trial with a drug called TH-302 that leverages the harsher myeloma therapies ONLY when it sees cells that are low-oxygen. Cancer cells grow in low-oxygen environments, so the goal is to spare healthy cells while targeting cancerous cells. She explains the common question of bone damage - do the bones every repair themselves? The live mPatient Myeloma Radio podcast with Dr. Irene Ghobrial, MD, PhD,

Check Out Health Podcasts at Blog Talk Radio with mpatient on BlogTalkRadio
Jenny:

Get the latest thought leadership on multiple myeloma delivered straight to your inbox. 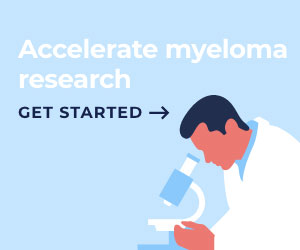