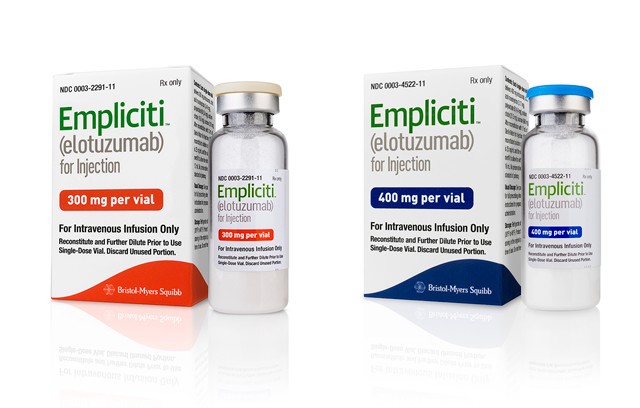 Empliciti (Elotuzumab) Is Approved In Europe for Relapsed/Refractory Myeloma Patients

Great news for myeloma patients in Europe: the European Commission (EC) has approved Empliciti (elotuzumab), in combination with Revlimid (lenalidomide) and dexamethasone for the treatment for those with relapsed and refractory disease who have had at least one prior therapy. Empliciti is the first immunostimulatory to be approved by the European Union for the treatment of multiple myeloma. Empliciti was approved last November in the US to be used with Revlimid.

“Empliciti represents an important new treatment option for patients with multiple myeloma and healthcare providers who are treating this cancer in Europe,” said Dr. Michael Severino, AbbVie’s executive vice president of research and development and chief scientific officer. “AbbVie is proud to be part of the team that developed Empliciti and pleased to be partnering with Bristol-Myers Squibb to bring this new therapy to previously treated multiple myeloma patients.”

The approval was based on the ELOQUENT-2 study, a Phase 3, open-label, randomized trial that aimed to evaluate Empliciti in combination with Revlimid and dexamethasone, versus Revlimid and dexamethasone alone, in patients with relapsed or refractory multiple myeloma. The study followed 646 people who had received one to three prior therapies. ELOQUENT-2 results revealed that Empliciti combo regimen improved the progression-free survival rate in 21% of participants at one year, 50% at two years, and 53% at three years of follow-up, when compared to Revlimid-dex alone. The overall response rate was also significantly increased with the Empliciti-Revlimid-dex combo (78.5%  versus 65.5 percent in the Revlimid-dex group). Extended follow-up analysis showed that patients given the Empliciti combo could delay followup by roughly a full year compared to Revlimid-dex treated patients. Despite the improvement in progression-free survival, Empliciti-Revlimid-dex therapy had more instances of adverse reactions than the Rd regimen, including diarrhea, fatigue, cough, upper respiratory tract infection, headache, and pneumonia. But the study’s investigator Dr. Antonio Palumbo, who is chief of the Myeloma Unit, Department of Oncology at the University of Torino in Italy, said that because multiple myeloma is largely incurable and often characterized with a cycle of remission and relapse, the critical need for new therapies that work in unique and innovative ways is high priority.

“Multiple myeloma has had a difficult-to-treat history, and at Myeloma Patients Europe, we are committed to ensuring these patients living in any European country are able to access new, innovative medicines, like Empliciti,” Dilar said.