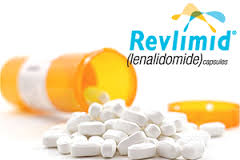 Celgene Corporation announced that the U.S. Food and Drug Administration (FDA) has expanded the existing indication for Revlimid (lenalidomide) in combination with dexamethasone to include patients newly diagnosed with multiple myeloma. Revlimid plus dexamethasone was previously approved in June 2006 for use in multiple myeloma patients who have received at least one prior therapy. "The approval of Revlimid as an option for use in all patients with multiple myeloma represents a new paradigm in the management of this disease," said Kenneth Anderson, M.D., Director, Jerome Lipper Multiple Myeloma Center, Dana-Farber/Brigham and Women's Cancer Center. "We now have clinical evidence demonstrating that starting and keeping newly diagnosed multiple myeloma patients on Revlimid significantly improves progression-free survival." The approval was based on safety and efficacy results from phase III studies, including the FIRST trial (MM-020/IFM 07-01), which evaluated continuous Revlimid in combination with dexamethasone (Rd Continuous) until disease progression versus melphalan, prednisone and thalidomide (MPT) for 18 months as the primary analysis, and a fixed duration of 18 cycles of Rd (Rd18) as a secondary analysis, in 1,623 newly diagnosed patients who were not candidates for stem cell transplant. In this randomized, open-label, three-arm trial, median progression-free survival (PFS), the length of time a patient lives from study randomization to disease progression or death was the primary endpoint of the study. PFS was significantly longer for patients receiving Rd Continuous (25.5 months) than for those treated with MPT (21.2 months; HR=0.72; p=0.0001). Median overall survival (OS) in the two groups was 58.9 months and 48.5 months, respectively (HR 0.75; 95% CI 0.62, 0.90) based on a March 3, 2014 interim OS analysis. Patients in the Rd Continuous arm had a 25% reduction in the risk of death compared to patients in the MPT arm. Safety results showed that adverse reactions reported in ≥20% of newly diagnosed myeloma patients in the Rd Continuous, Rd18 or MPT arms included diarrhea, anemia, neutropenia, fatigue, back pain, insomnia, asthenia, rash, decreased appetite, cough, pyrexia, muscle spasms and abdominal pain. The most frequently reported Grade 3 or 4 events in the Rd Continuous arm (until disease progression) included neutropenia, anemia, thrombocytopenia, pneumonia, asthenia, fatigue, back pain, hypokalemia, rash, cataract, dyspnea, DVT and hyperglycemia. "At Celgene, we are very happy with the FDA's decision, which adds information on the use of Revlimid plus dexamethasone as a first-line treatment for multiple myeloma to the prescribing information," said Jacqualyn A. Fouse, Ph.D., President, Global Hematology and Oncology for Celgene. "Now, as part of our commitment to improving the lives of patients living with this disease, our next step is to make the benefits of this treatment regimen available to those now eligible under the expanded indication." Celgene currently has an application under review with the European Medicines Agency (EMA) for approval to use Revlimid for the treatment of adult patients with previously untreated multiple myeloma who are not eligible for transplant. The EMA's Committee for Medicinal Products for Human Use (CHMP) published a positive opinion for this application in December 2014. About Revlimid In the United States, Revlimid is approved in combination with dexamethasone for the treatment of patients with multiple myeloma. Revlimid is also approved in combination with dexamethasone for the treatment of patients with multiple myeloma who have received at least one prior therapy in nearly 70 countries, encompassing Europe, the Americas, the Middle East and Asia, and in combination with dexamethasone for the treatment of patients whose disease has progressed after one therapy in Australia and New Zealand. Revlimid is also approved in the United States, Canada, Switzerland, Australia, New Zealand and several Latin American countries, as well as Malaysia and Israel, for transfusion-dependent anemia due to low- or intermediate-1-risk myelodysplastic syndromes (MDS) associated with a deletion 5q cytogenetic abnormality with or without additional cytogenetic abnormalities and in Europe for the treatment of patients with transfusion-dependent anemia due to low- or intermediate-1-risk MDS associated with an isolated deletion 5q cytogenetic abnormality when other therapeutic options are insufficient or inadequate. In addition, Revlimid is approved in the United States for the treatment of patients with mantle cell lymphoma (MCL) whose disease has relapsed or progressed after two prior therapies, one of which included bortezomib.