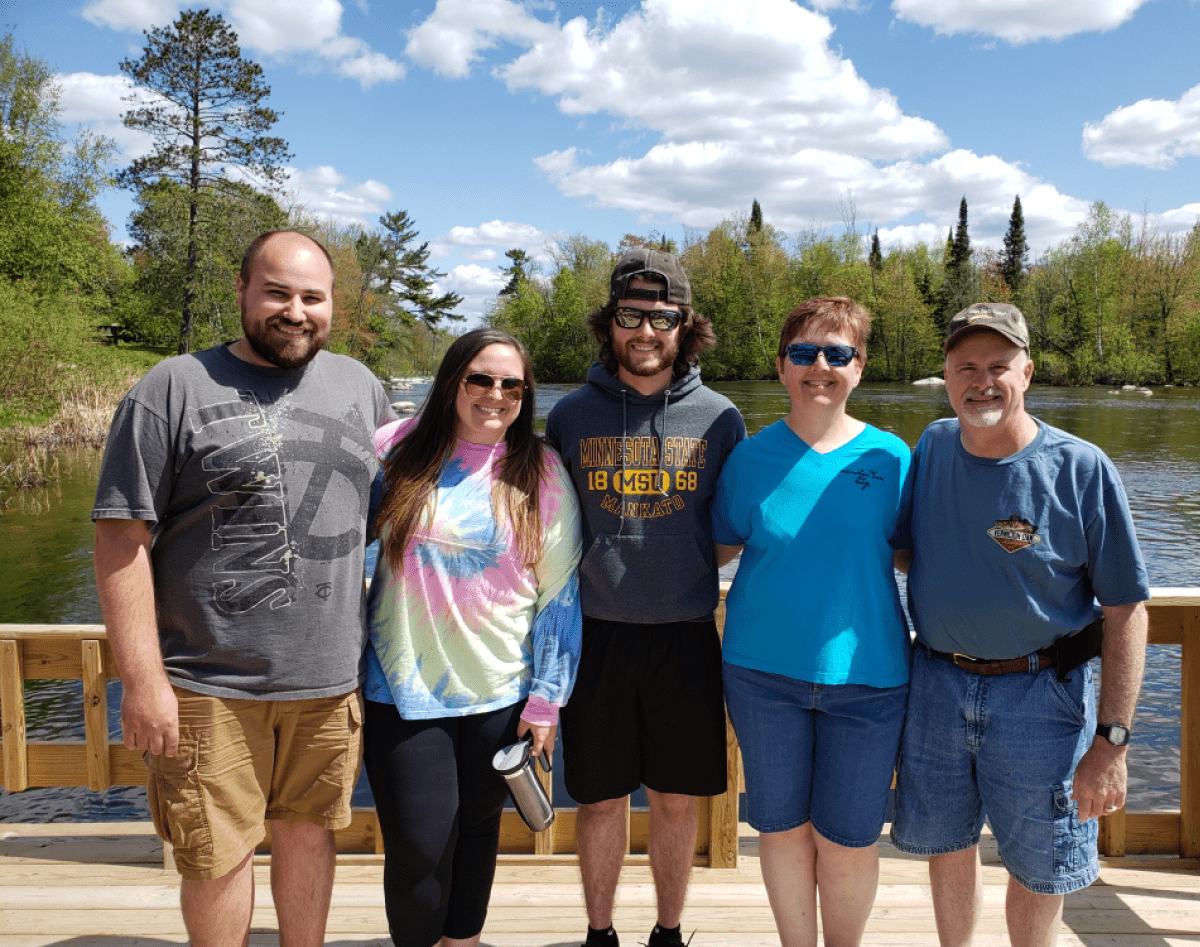 For his entire married life, John Miller’s wife would never let him do the household laundry because of his color blindness. But after his myeloma autologous stem cell transplant, guess who’s now in charge of the laundry? John - now that he can see color.

For his entire life, beginning in kindergarten, John remembers being color blind. He would regularly mix up brown and red crayons and his teacher told his parents there was no sense in getting the multi-color pack of crayons and that they should just buy John the regular 8-color basic color kit. He felt like he could never get the elementary school vision color charts right, with colors associated with specific numbers.

Into adulthood, even with perfect 15/15 eyesight, John was challenged at color recognition. Friends would ask what a stoplight looked to him. While green was a little more white, red looked like brown.

At age 55, in 2018, John started experiencing back pain. He saw a back specialist who burned off some nerves, but that didn’t help and the pain continued. That year his father had passed away, and John was tasked with settling his affairs so it was a very busy year. After more investigation, John was diagnosed with two back fractures, but the surgeons didn’t make an association with multiple myeloma during those surgeries on his T11 and T12 vertebrae. The neurologists kept asking if he had any idea where the fractures had come from – had John been in a car accident or had he slipped and fallen? Not living an Evel Knievel lifestyle, John couldn’t think of any reason his back would be having so many issues.

He finally received a multiple myeloma diagnosis in December of 2019. He began treatment at Minnesota Oncology with Revlimid/Velcade/dex (RVd), a common induction myeloma combination. His initial treatment was going well. His doctor was a fellow at the Mayo Clinic and began suggesting that John consider a stem cell transplant. But why? He had “standard risk” myeloma and his initial treatment seemed to be working quite well.

As an engineer who was in the habit of looking for root causes of failure, a stem cell transplant made no sense to him especially since he was experiencing a reduction in his myeloma from medication on full doses with minimal effects.

But the rationale started making sense when he started seeing a hematologist at the Mayo Clinic in Rochester. The doctor suggested that his first remission would be his best and most durable and that an autologous stem cell transplant could help with that. John got second and third opinions at the University of Minnesota and the Mayo Clinic.

John did his homework and started learning from other patients in the Stillwater support group with the help of support group leader Bev Culy. He planned to go ahead and collect stem cells but was still on the fence about the transplant. COVID hit in March, giving him a decision-making reprieve.

Because of the pandemic, Mayo Clinic suggested delaying the stem cell transplant process. In May they called back, letting him know the transplant program was once again open and they suggested he collect stem cells.

He learned a little more that ultimately convinced him to pursue transplant.  Further imaging revealed that he actually had 14 fractures and had lost 3.2 inches in vertical height.

His doctor also performed a Mayo Clinic-specific test called an sPhase test that could indicate how likely his myeloma cells were to divide. The normal range was 2%, he was at 3.1%.  Any additional damage to his spine would be life-altering.  He was now convinced transplant was the right answer.

Thanks to COVID, his transplant was in-patient and he and his wife Judy spent eight weeks in Rochester at the transplant house, where he had exceptional care.

He had no central line because they were planning to harvest his stem cells and finding a vein for collection required an “A team” level nurse. Finally, they found a vein and he was able to collect over 10 million cells in 5 hours.

He did the transplant two days later and described the day of melphalan and the day he received his stem cells as “anti-climactic.” Like many of us, it hit him the worst on days 7-8 where he had some gastrointestinal issues, lots of fatigue and had to stay on top of the Zofran to prevent nausea. He was convinced he would never lose his beloved goatee, but on day 12 it started coming out.

On day 70 he returned for a biopsy and his initial 80-90% of plasma cells in the bone marrow at diagnosis were now at .0016%. He followed the transplant with RVd consolidation and is now on Revlimid maintenance.

Last September, John and his family traveled to their favorite Minnesota lake near the Canadian border to do some fishing, something they enjoy doing together. The colder temperatures up north forced earlier color changes. What John saw was incredible. For the first time he could see red trees, which looked almost iridescent and three dimensional for him. The colors were so vibrant they were jaw dropping. Judy was stunned that John could now see color.

When the color changes came to his city a few weeks later, he was equally amazed. Small pleasures like watching the Kansas City Chiefs football game in the Arrowhead stadium brought the reds out to dramatic effect for John. He was like a kid in a candy store seeing these colors for the first time. He is not completely able to discern blue and grey hues, so his color blindness didn’t completely disappear, but his ability to now discern reds, greens and browns has been life changing for him.

While no research has been performed on color blindness changing during transplant, his Mayo Clinic doctors noted that “stranger things have happened.”

John found joy in becoming his own best advocate with his initial research leading him to the conclusion to obtain a stem cell transplant.  He mentioned how grateful he has been to find the Myeloma Crowd as a resource and how it’s been “what he has been looking for.”

Last week he spent over 6 hours on the site, learning more about the nuances and complexities of myeloma and then shared the site with over 100 friends. He’s determined to continue his myeloma education and share that knowledge.

As life-changing as his new love of colors has been, John now realizes that outlook is about much more than what one can see, it’s about how one lives.  And as thrilled as Judy is with the change in his myeloma, the pleasure of letting John do the laundry is a nice, unexpected perk.