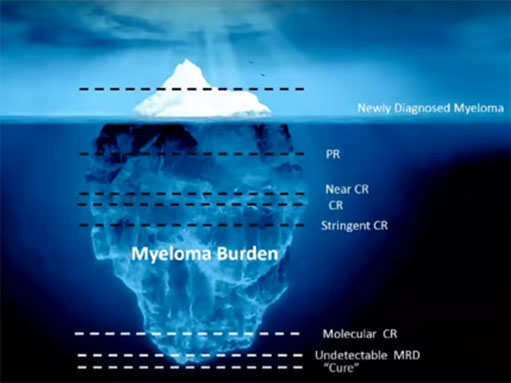 According to recent studies, patients with multiple myeloma who achieve minimal residual disease negativity after treatment have better long-term survival outcomes than those who show evidence of minimal residual disease. Based on the photo above, MRD testing goes beyond the designations of very good partial response, complete response or even stringent complete response to see whether deeper levels of disease detection can be performed.  As stated above, this increase in detail can help predict response to treatment and could lead to the identification of a patient being cured or not. In a recent study by Nikhil C. Munshi, MD and colleagues of the Dana-Farber Cancer Institute, Dr. Munshi wrote:

“A substantial proportion of patients with multiple myeloma can now expect to achieve clinical complete response as a result of new therapeutic advances. Nevertheless, most patients who achieve complete response will eventually relapse, suggesting that a small but clinically relevant population of myeloma cells not detected by current techniques persists.”

In Dr. Munshi's research, they accessed Medline to find studies published between 1990-2016 that used minimal residual disease testing to look at the impact on progression free survival (1273 patients) and overall survival (1,100 patients). For patients who achieved negative minimal residual disease, the progression free survival median was 54 months vs. 26 month. For overall survival the difference was 98 months vs. 82 months. The study did not evaluate which treatments were the most effective in achieving MRD status but five studies showed that autologous stem cell transplant helped increase the odds of achieving MRD status.

Munshi and colleagues wrote. “Minimal residual disease status is a marker of long-term outcomes in patients with multiple myeloma. It should, therefore, be considered a new endpoint in clinical trials and clearly has a role as a surrogate marker for OS.”

According to Kenneth Anderson, MD, PhD also of Dana-Farber, MRD tests vary in their sensitivity. In his opinion, 10 -6 is the most sensitive, so next generation sequencing is most likely the best type of MRD test. Minimal residual disease tests can now be performed in the clinic with bone marrow biopsy samples, so ask your doctor if you can access this test.