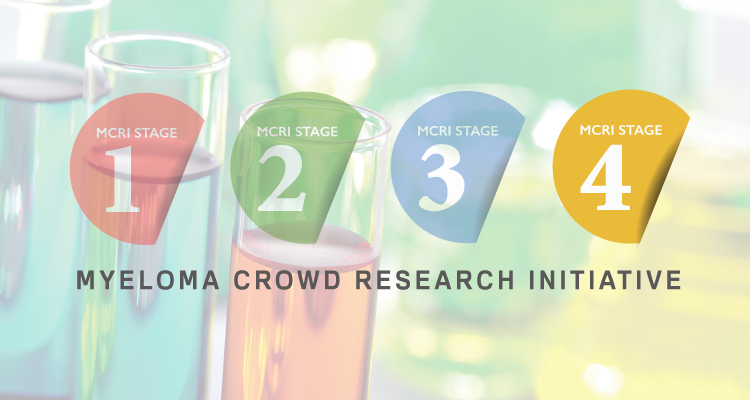 Donate to the MCRI

The Myeloma Crowd Initiative selected two proposals it has selected for the MCRI crowdsourcing and patient-led funding initiative. This is the first time that a united group of patients have joined with myeloma researchers to find and fund a cure for high-risk myeloma.

“The study of high-risk myeloma should be one of the top priorities for myeloma researchers. New and radically different treatment approaches are needed,” says multiple myeloma expert Dr. Rafael Fonseca, MD of the Mayo Clinic in Scottsdale.

Our goal is simple - cure multiple myeloma with the support of the patient community.

After a well-researched process (see below), we have selected two projects to begin our crowdfunding effort. Our goal is to grant each study $250,000 over a two year period, so a total goal of $500,000. To support these projects, we invite you to donate to the Myeloma Crowd Research Initiative here. The success of finding a cure lies with the myeloma community (patients and supporters). 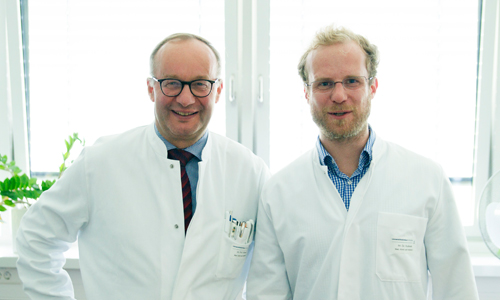 CAR T Cells are an intensely exciting area of research, showing a more than 90% response rates when used with patients who have failed standard therapies in leukemia. According to Dr. Michael Sadelain of the Memorial Sloan Kettering Cancer Center and co-founder of Juno Therapeutics, “CAR T therapy is at the same time cell therapy, gene therapy, and immunotherapy. It represents a radical departure from all forms of medicine in existence until now.” The same exciting potential is now coming to multiple myeloma. Today, CAR T Cell therapy seems to be a hot topic, overnight success, but it has been many years in the making. Doctors Einsele and Hudecek have been deeply involved in CAR T cell and immunotherapy work for many years. For their study, a patient's T Cells are removed from a blood sample and are then engineered with a specific CAR T cell receptor. After a two week period to allow the cells to expand and grow, they are given back to the patient via injection. The engineered (CAR) T cell can now seek and destroy the myeloma cells. The selection of the right target is critical. The doctors want targets found only on myeloma cells and not on normal cells and have selected CS1 and BCMA. They note that CS1 is found on all myeloma cells, while BCMA has slightly lower occurrence, but chose to use two targets instead of one for greater impact. They have found that after treatment, a small percentage of patients have cells that are smart enough to hide the target marker, called "immune escape". By using two targets, they have a better chance of finding and killing all of the myeloma cells. CAR T Cells can give unwanted side effects in a small number of patients because they are so powerful and take effect so quickly, sometimes creating a cytokine-release syndrome (CRS) when the myeloma cells die. If any patients exhibit severe side effects, the doctors can administer an antibody as an emergency brake, which immediately stops the effect in patients. For this study, the therapy is a single treatment and is not used with transplant or other combination therapies. It is now in pre-clinical work before it can be used in a Phase I clinical study. This study will be applicable for high-risk patients who have failed standard myeloma therapies but will also be appropriate for normal risk patients regardless of genetic features. To learn more about this important project, read or listen the Myeloma Crowd Radio Interview with Doctors Einsele and Hudecek.

Dr. Ivan Borrello, MD, PhD of the Johns Hopkins Sidney Kimmel Comprehensive Cancer Center, is working to create a patient-specific immunotherapy using enhanced T cells from the patient’s own bone marrow, for truly personalized medicine. He has found the marrow infiltrating lymphocytes (MILs) inside of the bone marrow to be more indicative of a patient's disease rather than taking a blood sample.

"Several years ago we did experiments where we took blood and bone marrow from patients and we activated these cells with beads in the laboratory and showed that upon activation there was no increase in tumor specificity or tumor recognition of the cells that were derived from the blood whereas, in contrast, the bone marrow cells or the MILs from the patients had roughly a 100-fold increase in tumor specificity," says Dr. Borrello.

The higher the specificity, the higher the chance a patient has of going into remission. After he extracts T cells from the bone marrow in an individual patient (similar to a bone marrow biopsy), he expands them a hundredfold outside of the body in the presence of the tumor cells, which help them recognize which targets to hit when given back. Three to four days after autologous transplant, he gives them back to the patient. When they are re-introduced, they target the hundreds of proteins that could be causing tumor growth for that patient, not just a single protein. This is an open clinical trial today for patients with high-risk genetic features. Compared to CAR T Cells, this approach targets hundreds of proteins versus one or two and limits the "immune escape" that can occur in the CAR T cell approach. By targeting the specific disease-causing proteins in each patient, Dr. Borrello hopes "that the likelihood of such antigen escape variance are potentially significantly less." The treatment is used in conjunction with autologous transplant to take advantage of the time where the transplant takes a patient's lymphocyte count down to zero. The body automatically tries to repopulate these counts, giving the new, enhanced T cells a chance to expand twice-- once in the lab and then again as part of the natural growth that occurs after stem cell transplant. In the future, the treatment may be successful with high-dose chemo but not as high as transplant requires. The side effects of the treatment have been minimal, especially compared to the CAR T Cell potential effects. This third clinical study is now open is for high-risk genetic feature patients who have not yet had stem cell transplant but they can have had other prior therapies. The study uses lenalidomide as follow-up treatment because it has anti-myeloma properties as well as immune system boosting properties. To learn more about this important project, read or listen to the Myeloma Crowd Radio Interview with Dr. Borrello. It's All About Immunotherapies

The MCRI selection speaks to the incredibly exciting use of the immune system in treatment options that are relatively non-toxic, which are long overdue for myeloma patients.

“The committee carefully considered the eight quality submissions and gave preference to the submissions that not only were exciting, but also close to clinical implication. With all the excitement recently about immunotherapeutic approaches in hematologic malignancies and myeloma, it is not too surprising that two submissions based on immunologic approaches were chosen for funding,” says Dr. Guido Tricot.

“As a very fortunate 20-year myeloma survivor, I am impressed with the number of FDA-approved new drugs over the last 12 years. However, these current treatments are generally used to extend survival curves but typically don’t access the possible benefits of our own immune system. Today, as we understand more about the biologics of the myeloma cell and micro environment, new research is focused on giving our own immune system a boost in order to make it more effective against this disease. I am excited about these two proposals potentially providing myeloma patients with even better treatment options than we have today.”

We called for Letters of Intent (short two page proposals) from the myeloma research community from around the world. We asked them to submit their research projects specifically for high-risk myeloma because it represents the biggest need. Many myeloma patients have access to a growing number of treatments, but high-risk patients run out of options quickly. For patients with high-risk features or with aggressive relapsed disease that is no longer responding to treatment, a cure cannot come soon enough and their outcomes still remain dire.

“We received a total of 36 high-quality, innovative proposals spanning the spectrum from basic to translational and also clinical studies.  These came from US-based as well as international investigators, and were all deemed to be promising towards the goals of advancing the molecular understanding of high-risk myeloma, and developing novel therapeutic options," said Dr. Robert Orlowski. “I was pleasantly surprised by the number and quality of the applications received for this type of myeloma,” said Dr. Guido Tricot.

The Scientific Advisory Board selected 10 of the 36 proposals. “After careful review of a large number of innovative projects focusing on high-risk myeloma, we invited the final investigators to develop and submit their full proposals for review. This is a very exciting time for myeloma research,” says Dr. Ola Landgren, MD, PhD, and Scientific Advisory Board Member. Each of the researchers then participated in an hour-long interview to further describe their project and answer questions from listeners on Myeloma Crowd Radio.

We asked each member of our Scientific Advisory Board to be a primary, secondary and tertiary reviewer of three proposals each. We held a call with both the scientific and patient boards to discuss each proposal and each one was impressive in its objective and design. Selecting just two was an incredible challenge. Myeloma survivor and advocate Pat Killingsworth says, "There are so many exciting research proposals, it’s a shame we could only pick two. This is a case where more money can make a difference and help save lives."

This is just a beginning to a fundraising platform that has never before been used to fund myeloma research. Typically, an organization like the LLS, MMRF, Myeloma UK or IMF will select projects they wish to fund and will raise a pool of donations they will then give to investigators of their choice. If an investigator is lucky enough, they will be far enough along in their research to get funded by the NCI who funds one out of every 12 proposals submitted. Either way, the chances of getting funding is slim and much promising research is left on the laboratory bench.

Our approach is drastically different - the MCRI is validating and selecting highly promising  proposals that appeal to both the scientific and patient communities. This is where the myeloma community of patients, supporters, and advocates comes: We ask you to start a team and start raising funds. Absolutely ALL oproceeds from this campaign will go to the two projects. For the first time, donors will know exactly where their donation is being applied.

Every patient has a community around them who wants to see them beat this disease. This is something the myeloma can do that will have a direct impact on disease outcomes. It is specific, it is easy to understand and it will bring life-saving research into the clinic quickly

. To get started, click here. As myeloma patient and advocate Cynthia Chmielewski says, "I believe the final two proposals the Advisory Board selected are innovative, based on sound scientific principles, and already being used in the clinic. This represents real hope for myeloma patients." To create your fundraising page, start here. If you need help, email us at info@crowdcare.org and we will walk you through the process.