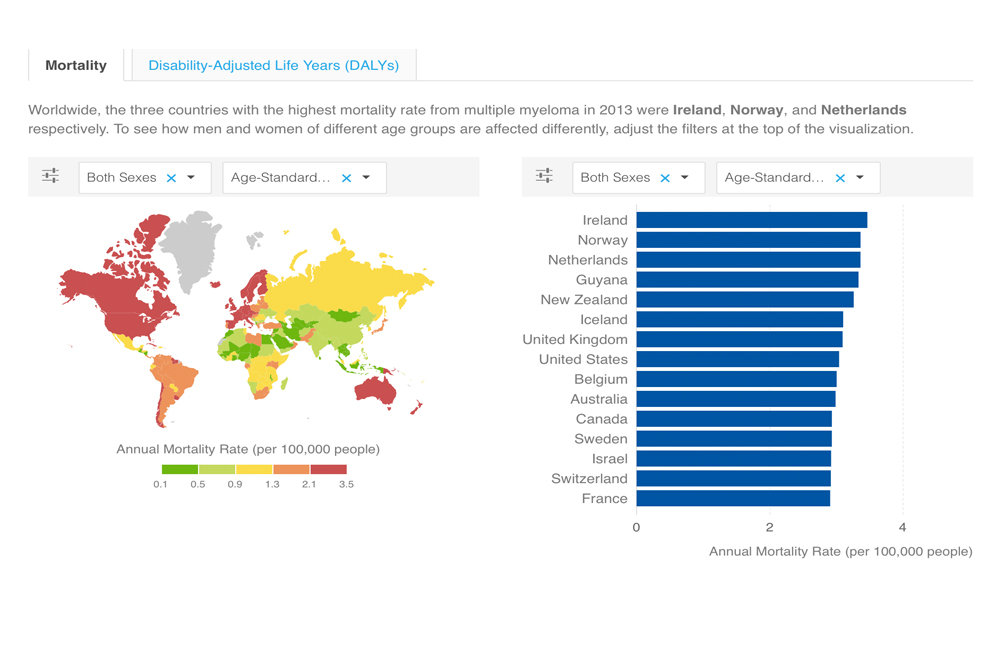 Multiple Myeloma – Why Does Survival Depend On Where You Live?

I had known myeloma was more prevalent in the USA and Great Britain than it was in say China or Saudi Arabia, but had felt the difference might just be a result of differences in population, age, and reporting. But then I was sent the image above. It uses an age adjusted mortality rate, which weighs+ the mortality by age group to a standard age distribution. This would take away the impact of an older population on the data. So is it just reporting? I looked at locations which had national health care or a really good health care system like China and Saudi Arabia in the hopes their reporting was closer to the USA and Europe.

But comparing these locations you find the deaths per 100,000 population is as follows:

So the US and Great Britain have a mortality rate 5 to 6 times greater than China and Saudi Arabia. The answer of why is in the numbers, and if we can find the answers we just may be able to change practices and lifestyles to make a 2 to 6 fold improvement in mortality. We have just doubled the life expectancy from 3 years to 6 years, but a 6 fold improvement would be to go from 3 to 18 year life expectancy.

There are a number of carcinogens which we currently know of like smoking, processed meats, pollution, pesticides, pcbs, dyes, food additives, etc. But only a retrospective study comparing all of the current known and potential causes of myeloma in the myeloma and non myeloma population will ever be able to sort this all out. It would be a monumental effort, however, with a 5 to 6 fold payoff, how great would that be.

To see myeloma around the world in an interactive map

Good luck and may God Bless your Cancer Journey. For more information on multiple myeloma survival rates and treatments CLICK HERE and you can follow me on twitter at: https://twitter.com/grpetersen1