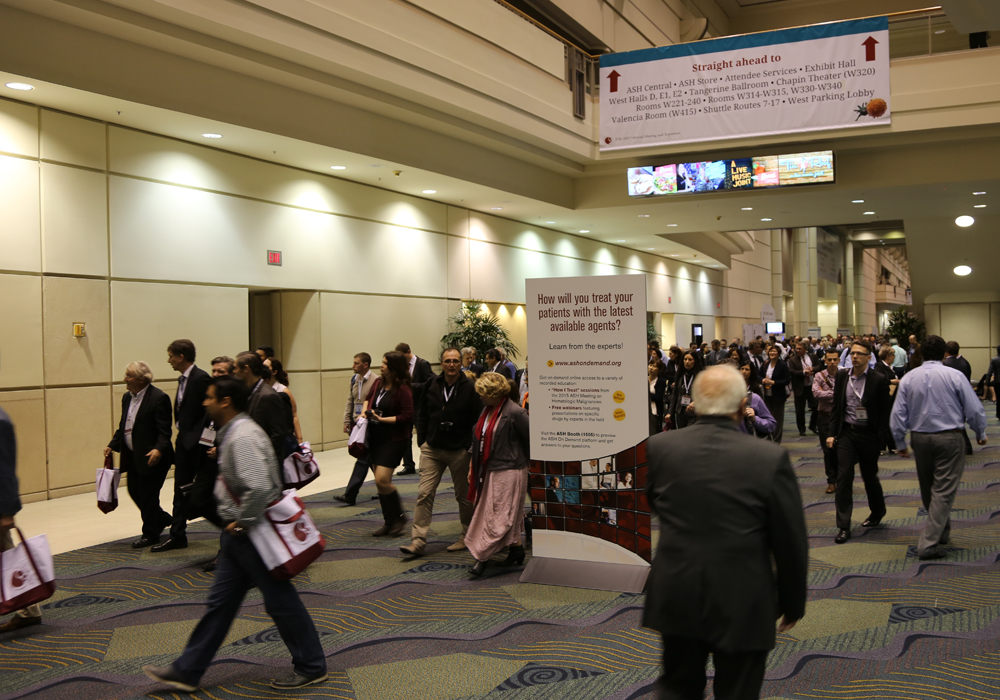 BY GREG BROZEIT Thanksgiving kicks off the holiday season for most Americans. But for me, it begins with the annual meeting of the American Society of Hematology (ASH) which is always held in the beginning of December. I attended my first ASH meeting in 1998 when the news of about thalidomide, the first new drug treatment for myeloma in more than 40 years, put myeloma in the ASH headlines for the first time. Fast forward to 2015, it seemed that the news was all myeloma, all the time: Newly approved, potentially paradigm-shifting drugs—three in the past few weeks, a total of six for the year, improved outcomes, meeting rooms packed to the fire code maximums, and overlapping myeloma presentations forcing attendees to pick and choose among them. ASH 2015 seemed to be the beginning of a holiday season filled with gifts waiting to be opened by physicians and patients. But just like an over-stimulated child at Christmas who gets too much and quickly loses interest, there is a danger of overlooking the devil in the details. Rather than unbridled euphoria, I think this is a time for measured optimism tempered by issues of caution, uncertainty and patience. Caution: Don’t forget that the best outcomes for the newly approved monoclonal antibodies show as many as two-thirds of treated patients derived little-to-no benefit. All the recently approved drugs—just like their effective predecessors—will still cause a wide range of considerable side-effects for significant minorities of patients. Thankfully, for most patients, they will be manageable. Moreover, physicians still will plan therapies with expectations that each drug will fail at some point. But as experienced patients know, relapse is not the end of the world; it’s just another fork in the road of a long journey. The news of ASH 2015 is great, but we have to stay grounded: there are no magic bullets to cure the disease. And we shouldn’t expect them anytime soon. Uncertainty: Even for the most experienced experts sequencing—when to use which drug—is a calculated art, not an exact science. Consider the fact that current clinical trials still rely heavily on combinations that mostly include bortezomib, lenalidomide and dexamethasone (VRD). More diverse trials using the new drugs are needed, especially for newly diagnosed patients. Ironically, the variety and number of new drugs and their possible combinations may actually slow the pace of clinical trials needed to confirm and verify the effectiveness of some therapies. Think of it as a drug research traffic jam. For example, a carfilzomib study earlier this year that was instrumental in its approval for relapsed/refractory patients showed it to be twice as effective as bortezomib, the most widely used proteasome inhibitor. Indeed, a vast majority of the attendees to a major ASH symposium voted for carfilzomib/RD (KRD) as their first choice for a patient in first relapse. But relatively few combination studies testing KRD with other drugs are taking place. Now the newly approved oral proteasome inhibitor, ixazomib, must also be studied in more settings. And what about the role of stem cell transplants? On the one hand, speakers openly questioned the need for autologous stem cell transplants (ASCT) more than ever. On the other, a long-term study by the French myeloma working group underscored the effectiveness of transplants and “that ASCT should remain a standard of care for young patients with [newly diagnosed] myeloma, and…that [lenalidomide, bortezomib and dexamethasone] plus ASCT could be a future” standard protocol. One of the more interesting ASH moments I experienced was when Bart Barlogie made a comment during a session on myeloma biology in which the “Darwinian evolution” of myeloma—the ability of cells and targets to resist therapy and mutate—was discussed. For him, the lesson was that “combination therapy to its extreme is what is needed in multiple myeloma right now.” In other words, hit as many targets as hard as you can to fight myeloma most effectively. The answer, in my opinion, will be found in improvement and use of genomics as diagnostic and prognostic tools. Although tests currently exist, they will need to be refined to link specific disease-causing target with the appropriate treatment. In the longer term, these tests must become more sensitive to identify the proper targets in the first place. Patience: Long-term data is needed to really understand how lasting and effective the new drugs will be and how they will be combined with other drugs. Take note. Long-term data collection takes time. As I mentioned above, there is a paradoxical downside to the approval of many drugs in a short time. Another consequence is that may who take the new drugs will end up becoming participants in a huge, uncoordinated clinical trial. Their cumulative experiences will soon dictate new stories influencing future therapy decisions. This will take time. Additionally, the sheer number of formal clinical trials that will be needed becomes even more daunting when we consider that only three-to-five percent of eligible patients take part in clinical trials in the U.S. Unless there is a cultural shift in participation, this will also take time. I have often cited a speaker I heard a decade ago who noted: if engineers had the same amount of knowledge about their field as oncologists have about theirs, then bridges would be collapsing daily all over the world. With all the great advances in myeloma in the past decade it is easy to be lulled into a sense of inevitability that a cure is just around the corner. But reality is more complicated and messy. In the world of cancer, bridges continue to collapse every day. The major advance in myeloma is that doctors have a better understanding of why some of the bridges are falling. We can only celebrate when the bridges being built for patients are strong and enduring. There is no question that day is closer, but no one can truthfully say how close. But if and when we reach it, it will be one heck of a holiday season.