Multiple myeloma patients are at greater risk of having a stroke or heart attack based on the results of the largest real-world study of its type in the United States.

Abdul Rahman Al Armashi, M.D. and fellow investigators presented these findings at ASH 2022 (Abstract 3215: and Poster: 3215) after retrospectively reviewing the medical records of over 70 million patients, nearly 68 thousand with multiple myeloma. Alarmingly, having multiple myeloma was on par with tobacco use as a predictor of strokes, and shown to be a significantly greater predictor of heart attacks than obesity. 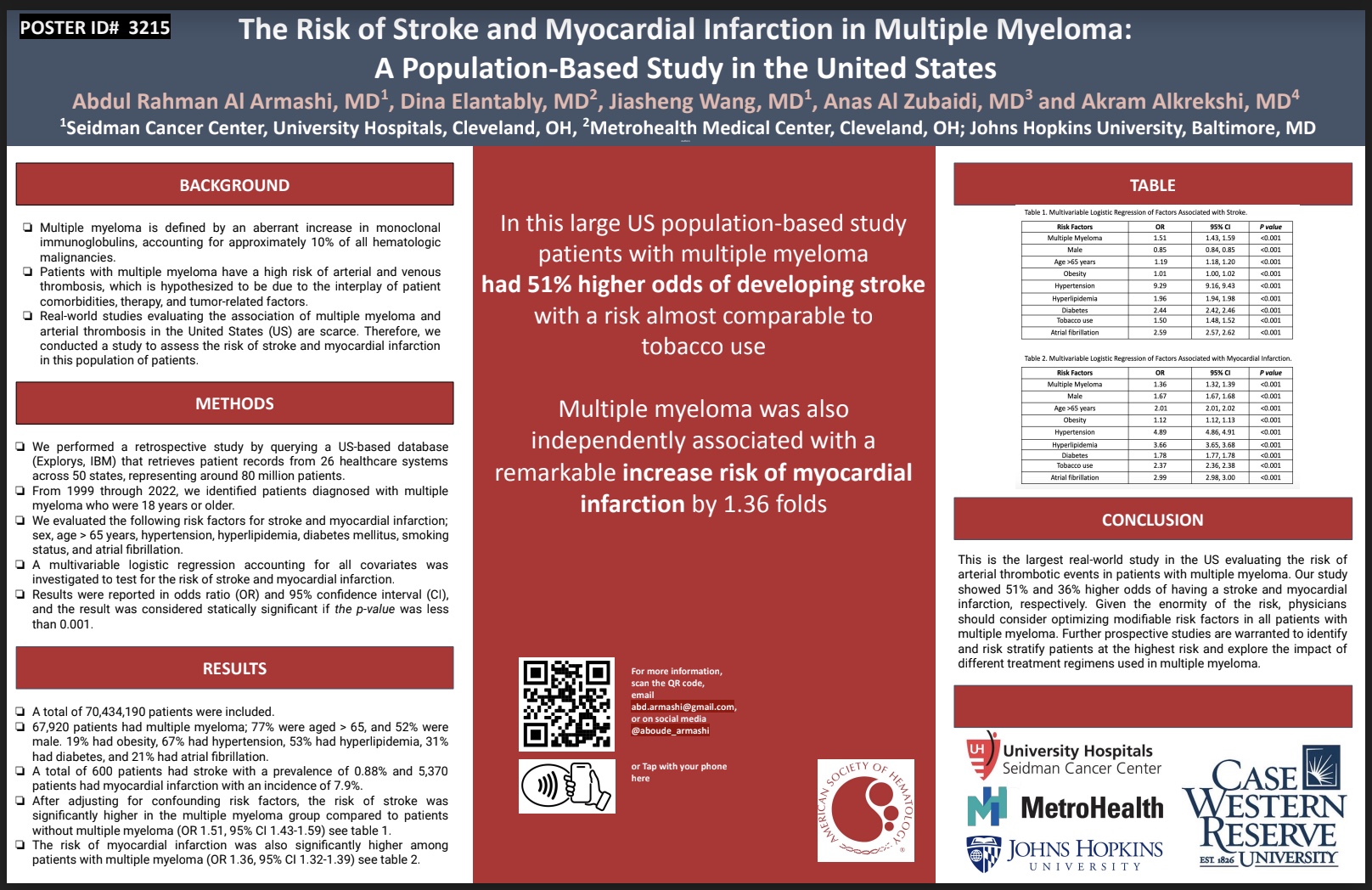 While it has long been hypothesized that multiple myeloma patients are at greater risk for strokes and heart attacks, there have been few real-world studies evaluating the association in the United States and it was assumed that comorbidities played a major factor. To ensure statistical significance, (in other words, have confidence that the findings were not based on the patients chosen being lucky, or in this case unlucky) this study was comprehensive. It reviewed records of over 70 million patients from 26 healthcare systems across 50 states over a 23-year period and used statistical analysis that accounted for the mitigating variables.

To put the findings in simplest terms, a patient with multiple myeloma had 51% greater odds of having a stroke compared to a patient without multiple myeloma. These results were reported with a 95% confidence interval and a probability value of less than 0.001. In other words, the findings were statistically highly significant with a narrow margin of error. High blood pressure (hypertension), irregular heartbeat (atrial fibrillation) and diabetes were the top three risk factors that increased the risk of a stroke, but 51% higher odds for multiple myeloma alone is alarming. Keeping in mind, if you have multiple risk factors, the odds go up from there.

Furthermore, the study found that patients with multiple myeloma were also at a higher risk (by 36%) for heart attacks (myocardial infarction). Again, these results were highly significant statistically-speaking, and highly concerning medically-speaking.

The magnitude of the increased risk for multiple myeloma patients for stroke and heart attack should not be ignored by patients or their doctors. Patients can improve their odds by eliminating tobacco use and having regular wellness screenings where weight, cholesterol, blood pressure and diabetes numbers are monitored, and problems mitigated. If there are issues with any other risk factor, they can be reduced through various means including diet, exercise, and medication.

The U.S. Department of Health and Human Services has created a comprehensive list of age and gender specific preventative health guidelines that are recommended in this resource.

Due to the advancements of treatment options available for multiple myeloma, patients are living longer. Whereas multiple myeloma may have been the biggest worry in the exam room at diagnosis, the risk of stroke and heart attack are lurking in the background. This study should motivate myeloma patients to make sure they are staying on top of their whole-body health.

Diane shares her knowledge of myeloma and helpful resources with others as a HealthTree Coach.  She strives to empower other myeloma patients and caregivers to educate themselves and seek out the best treatment and care.

find or become a HealthTree Coach 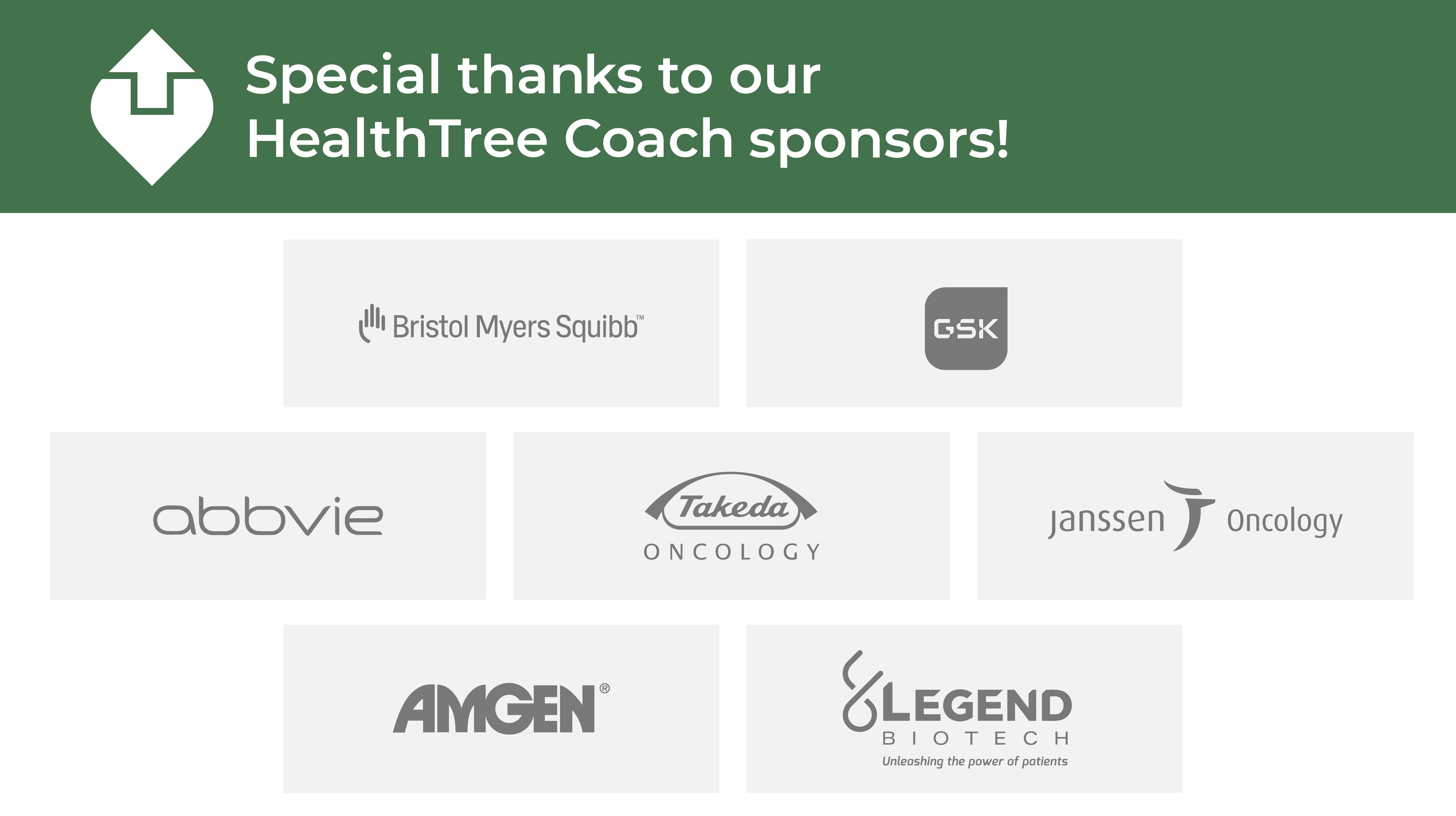 about the author
Diane Kennedy

Diane Kennedy is a care partner to her husband, Todd, who was diagnosed with multiple myeloma in 2017. She spent her career working in marketing and as a freelance writer. In 2020 she and Todd decided to transition from their professional careers to focus their efforts as patient advocates, Myeloma Coaches, and co-leaders of the SoCal Myeloma Community Support Group.