I arrived for the first time at the Chicago ASCO annual meeting with the theme Caring for Every Patient, Learning from Every Patient. I received a Conquer Cancer scholarship to attend this conference. My ASCO experience started by attending an education session entitled Many Shades of Disparities in Myeloma Care. The presenters during this well-attended session were Drs. Ganguly, Mailankidy and Ailawadhi. If a health outcome is seen to a greater or lesser extent between populations, there is disparity. The myeloma disparities that were discussed during this session included geographic location, global access and race. 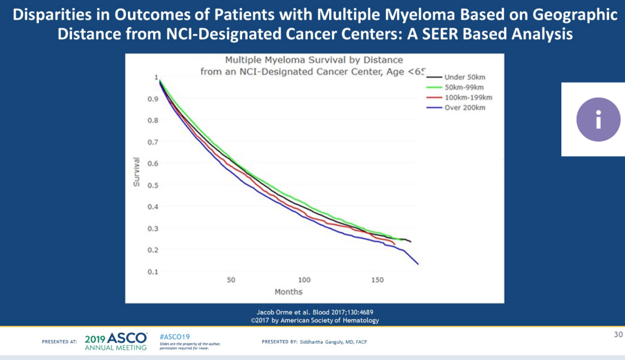 Over the last decade several new myeloma treatment options have been approved and many exciting new therapies are in clinical trials. Overall survival rates are continuing to improve for individuals diagnosed with multiple myeloma. Unfortunately, the data is showing that not all patients are benefiting from improved treatment options. 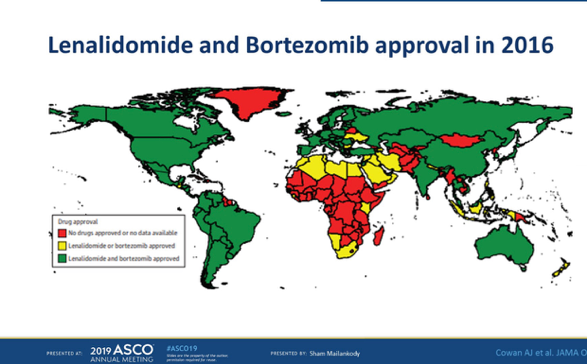 The first lecture by Dr. Ganguly of the University of Kansas Health System was focused on disparities in myeloma care found in rural North America. Dr. Ganguly pointed out that universal access to quality healthcare remains a problem in the United States. Disparities such as underutilization of cancer screenings, lower likelihood of receiving guideline-appropriate therapy and access to clinical trials exist in rural areas of the country. In one study by Elsayed et al only 1/3 of patients from rural New Mexico were offered or educated about Autologous Stem Cell Transplant (ASCT) and only 18.5 % of patients received an ASCT which is much lower than the national average. Dr. Ganguly stated that increased awareness and supporting data is needed to define this problem. Dr. Ganguly applauded the NCI and ASCO for their Myeloma Care - A Think Tank Approach program for addressing disparities.

Dr. Mailankody from Memorial Sloan Kettering Cancer Center discussed the global disparities in myeloma care.  He pointed out that myeloma and MGUS incidence is twofold higher in African Americans and that prevalence of MGUS was similar in Ghana and the African American population suggesting a shared genetic susceptibility. Alarmingly access to pathologists, radiotherapy and medical oncologists in sub- Saharan Africa is 10 to 100-fold deficient compared to the US.  Eight countries had no trained oncologists and 27 countries had 1 oncologist caring for 1000 or more cancer patients. There are also disparities in global access to cancer therapies.  See the chart below. Dr. Mailankody also pointed out that approval does not equal access.  Poverty and lack of insurance coverage limits access. 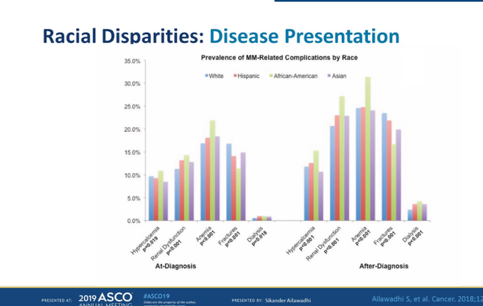 All the presenters hoped that research and understanding of disparities in myeloma care will lead to solutions that can be implemented in the near future.