The treatment of smoldering myeloma is up for debate and has been for years. In one ASCO session, Sagar Lonial, MD of Emory Winship Cancer Institute showed that not all myeloma is the same. 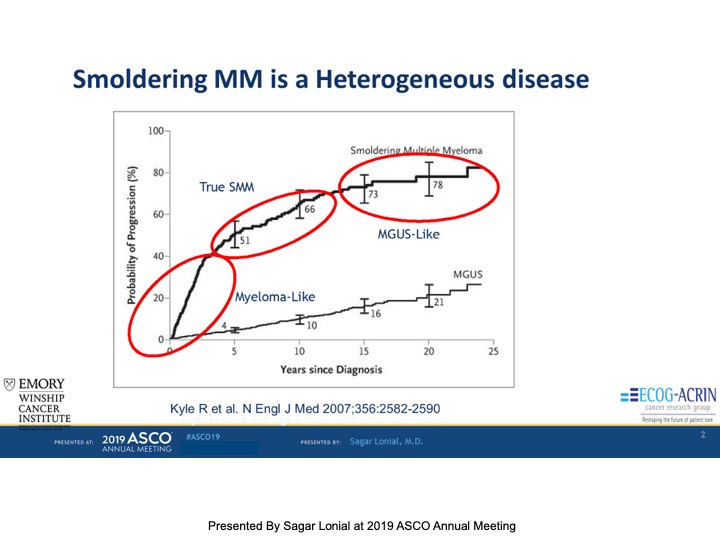 Some smoldering myeloma behaves more like MGUS, an earlier precursor condition. Some behaves like active myeloma. Understanding when and who to treat is an active area of myeloma research. Dr. Lonial noted:

Patients may wonder if the disease may be better split into MGUS only or active myeloma if that's the case. If it's just really slowly progressing myeloma, there's bound to be end organ damage eventually. But some patients can go years without progression.

There are many studies now open for smoldering myeloma patients. One study was covered at the recent virtual American Society of Clinical Oncology (ASCO) meeting with an approach to cure it at the smoldering stage before it turned to active myeloma.

The study, called the GEM-CESAR trial, is a potentially curative strategy for high-risk smoldering myeloma patients who are likely to develop active myeloma symptoms within two years. The study end point was looking at the level of sustained minimal residual disease (MRD) negativity. The study is being performed by the Spanish Myeloma group led by Maria Victoria Mateos, MD.

In the study, patients received Kyprolis/Revlimid/Dexamethasone for six cycles and then received an autologous stem cell transplant with two more cycles of KRd as consolidation therapy and up to two years of Revlimid maintenance. This type of protocol would be commonly used for patients with active myeloma. Results were as follows:

Three patients from this group have progressed so far. Two were MRD positive at the three time points while one was MRD negative by flow but MRD positive by mass spectometry. The use of the more sensitive mass spectometry may provide more relevant information about the right timing for the biopsy.

This trial may demonstrate that if only half of patients are becoming MRD negative and 68% are achieving greater than complete response, then earlier treatment in smoldering myeloma is warranted, especially those in the high risk smoldering myeloma category.

Other smoldering myeloma studies comparing treatments such as Revlimid/Dex vs. Daratumumab/Rev/Dex are in process and will help determine whether early intervention with triplet therapy is a better approach than a less intensive prevention strategy.