What is CRISPR and how will it impact me?

According to one myeloma expert, the biggest pre-ASH “buzz” this year centered around abstract 49:

What?  I had no idea what that meant. But I saw “first in human “ and “CRISPR” and decided to find out. So I did my homework ahead of time and then, bright and early Saturday morning at ASH 2019 I headed for the oral presentation.

I knew the “buzz” was all about CRISPR.  (And, I knew that “CRISPR” was one acronym I would not mind using rather than continually writing “Clustered Regularity Interspersed Short Palindromic Repeats”.  That mouthful seemed to make no sense anyway.)

CRISPR, is an amazing way to change DNA:

It took a lot of reading and watching many (really excellent) YouTube videos to get my still-limited understanding of how it works. But it is so incredibly cool that I really want to try to tell you, briefly and in plain English, what it is, so please bear with me:

Apparently, now that scientists can sequence the human genome, they’re also sequencing every genome they get their hands on. Things smaller than us for some reason sometimes have a lot more genes. Like for instance a laboratory mouse has about 30,000 to our 25,000 but our genome (the way the genes are arranged on our DNA) is much more complex.

Well, when studying bacteria, scientists noticed that some of them had an oddity in their gene sequence. The oddity was “Clustered Regularity Interspersed Short Palindromic Repeats“.  (Ah, so that’s where the acronym came from!) It was like there were these extra groups of genes in the genetic sequences of these little microscopic guys that kept coming up over and over.  It was a mysterious secret code!

Well, as it turns out, bacteria have an immune system.  And this bacteria’s immune system had, at some point, encountered a dangerous virus that might have killed it had it not learned how to fight it off.  In fact, in its life and the lives of its ancestors, several viruses had been fought off. And now “how to fight a virus” was coded repeatedly in its DNA, once for each type of virus, just in case it ever had to fight it again!

Meanwhile, another scientist was noticing something else in bacterial survival. It was a bacteria that could use a certain protein or enzyme to fight a virus by identifying and snipping  out specific genes in the virus’s DNA.  It could find the sequence it needed with incredible speed and accuracy. Who knew these tiny invisible bacteria and viruses lived such a complex interesting existence?  The DNA snipping protein was dubbed CAS-9 meaning CRISPR associated protein 9.

So long story short, one of these scientists, a UC Berkeley professor named Jennifer Doudna, along with her associates, was brilliant enough to figure out how to combine CRISPR with CAS 9 and, incredibly, to use these bacteria and proteins to snip out any gene from any cell’s DNA and even to replace it with any other gene.

This was revolutionary!  It happened in 2012 and ever since there has been, well, a “buzz” of activity surrounding this new ability.

What’s been done so far:

In the works are the elimination of malaria, regeneration of muscular tissue in patients with muscular dystrophy and a cure for sickle cell anemia! Now don’t get too excited.  It’s early days. The MD work is only in mice so far but they say it is incredibly promising. The sickle cell gene editing is now starting its first human trial.  The elimination of malaria can be accomplished by editing the genes of mosquitoes and they’re just figuring out the logistics. More research is going on all around the world.

The ethics involved with using CRISPR/CAS9 are critical. A species with a short gestation period (like the malaria carrying mosquito) could easily be wiped out. We’ve seen enough sci-fi to know there could be unforeseen consequences of such a thing.  CRISPR can also be used to genetically engineer offspring. Last year, at a medical conference in Japan, a Chinese doctor announced he had used CRISPR to alter the DNA in some human embryos. The scientific community was outraged. There had been no pre-testing on animals, no collaboration with the scientific community, and it appeared the alteration in the DNA was not exactly as intended. Yes, there is decidedly, a”buzz”. 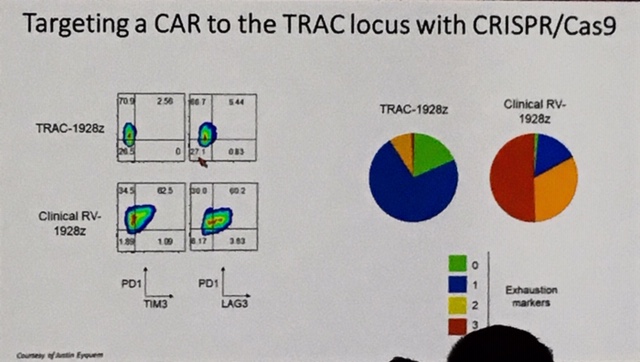 How does this directly affect Myeloma patients?

What abstract 49 is about is perhaps, baby steps (and necessarily so). The researchers have used CRISPR to edit t-cells in a CAR-T study.  In CAR-T, T cells are extracted from the patient, genetically engineered to be able to kill cancer cells, grown in the laboratory and then replaced in the patient where they do their work.  In this study, the genetic engineering was done with CRISPR.

There are three recipients of the edited T-cells in this study.  Two are heavily pre-treated Myeloma patients and the third has a myxoid/round cell liposarcoma (MRCL).  In actuality, CRISPR was just a small part of this experiment. But as I said, baby steps. This was a phase 1 trial. And what was shown, was that the process was safe, feasible and viable. Patients tolerated treatment well without toxicity. By day 60, patient one had progressed slightly. By day 90 patient two remained stable. Patient three had not been in the trial long enough to be evaluated.

It may not sound thrilling, like curing malaria or sickle cell, but CRISPR is going to change the world. We have to hope that it will be for the better. And that the better will include us all.