The financial impact of myeloma treatment and medication is high (due to cost, combinations and extended treatment time). These costs often have devastating impact on individuals and their families. This burden can cause mental and emotional stress with a significant impact on quality of life. These factors can lead individuals to postpone or even stop necessary treatment. Decreasing financial toxicity not only impacts quality of life, but also myeloma care.

Alice Silberstein and her team from the Washington University School of Medicine presented research on financial toxicity among patients with myeloma at the recent ASH meeting.  They contacted patients who had previously participated in an institutional banking study and mailed them a questionnaire which included the Comprehensive Score for financial toxicity (COST).  Scores on the COST range from 0-44 with a lower score indicating increased financial toxicity. 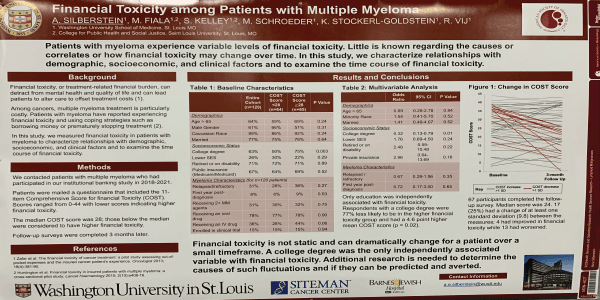 A total of 234 patients were contacted and 129 participated in the study.  The median COST score was 28.  Those with a score below the median were considered to have higher financial toxicity.  Follow up surveys were completed 3 months later.

Education was the only independent variable associated with financial toxicity.  Participants with a college degree were 77% less likely to be in the higher financial toxicity group and also had a higher COST score (4.6 points higher).  Financial toxicity was also seen to be a dynamic variable that can change dramatically within a small time frame.

While additional longitudinal research is necessary to determine if financial toxicity can be prevented or averted, these preliminary findings indicate the complexity of this issue impacted by multiple variables.

If you are experiencing financial stress and toxicity related to your myeloma treatment and care a Myeloma Coach is available help. As myeloma patients or caregivers themselves, Coaches can share the financial resources that have helped them manage the financial burden of myeloma to prevent toxicity. Coaches have experience with a wide variety of financial resources and tools to help ease the financial impact of myeloma. Don't delay or stop treatment due to the cost- reach out to a Myeloma Coach today to learn about the resources that are available. If you would like to share what you have learned as a myeloma patient or caregiver- consider becoming a Coach. Your experience and knowledge can make a significant impact in other's lives.

Richard Abraham's Myeloma Journey With the Elephant on His Back

Higher Rates of Melanoma in Patients with Multiple Myeloma