Based on the SEER database, we learn that Black multiple myeloma patients older than 65 have better survival outcomes compared to their white peers when receiving similar treatments. We also know that 10% of patients develop myeloma before age 50 and younger patients can tolerate more intensive treatment, leading to longer survival than their older counterparts. Putting these two ideas together, The Ohio State University researchers wanted to see if there were connections between survival and race.

In the recent study, The OSU myeloma researchers studied 258 individuals under 50 diagnosed with multiple myeloma between 1992 and 2019 where 23.3% were black and 76.7% were white. For all patients, the median overall survival was 9.4 years. Most of the patients were male, were ISS stage I and had IgG myeloma. Patient characteristics included the following:

Therapy for both groups was remarkably similar:

As you can see in the chart below of patients diagnosed before age 50, black patients (red line) did better overall than white patients (blue line) when looking at time from diagnosis and time from first transplant. 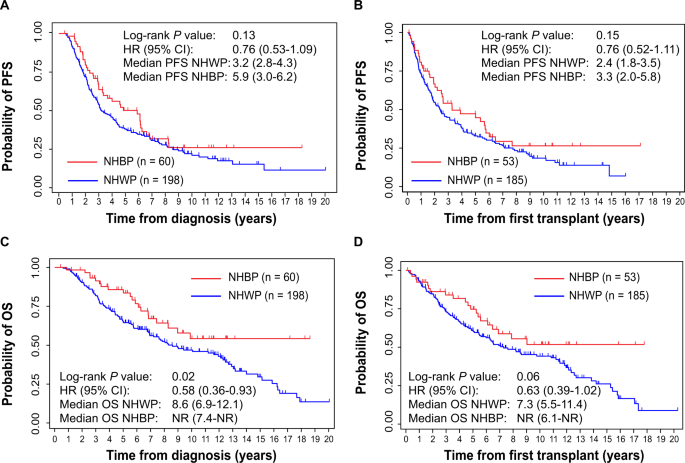 The study identified that black patients under 50 had statistically longer overall survival compared to their white counterparts, which is also the same for patients over 65.

The use of Velcade/dex, Revlimid/dex or Velcade/Revlimid/dex was especially helpful in blacks compared to whites, while other induction chemotherapy combinations showed no differences.

The presence of del(13q) trended towards shorter overall survival in all white patients (and was more commonly found in white patients). Blacks had fewer high risk features in general and had fewer secondary cancers.

In general, black patients diagnosed before age 50 have longer progression free survival and overall survival compared to their white counterparts when treated with the same types of therapies. This stresses that getting "standard of care" treatments for black patients is critical to improving long-term outcomes.