Researchers haven’t cured myeloma yet, so local patients are taking the task of finding a cure into their own hands. Myeloma is a plasma cell cancer that begins in the bone marrow. Most people who are diagnosed with myeloma are over the age of 50, men are more likely to be diagnosed than women and blacks have almost twice the chance of acquiring myeloma, according to the Leukemia and Lymphoma Society. “The goal is to have patients involved in accelerating their own cure,” said Jenny Ahlstrom, the founder of Myeloma Crowd, a website providing information, support and resources that is part of the Lehi-based Crowdcare Foundation. “Most of the time you sit back and a doctor says you can have this treatment or this treatment.” 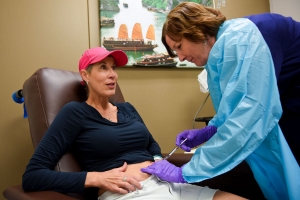 At 48, Lehi mom Lizzy Smith isn’t the typical myeloma patient. “When I was first diagnosed diagnosed, I didn’t even know what myeloma was,” she said. After being diagnosed in 2012, she moved from San Diego to Utah to receive treatment. Until she met Ahlstrom on Twitter and got involved in Myeloma Crowd, she thought she was the only female in Utah around her age that had myeloma. “It’s really overwhelming when you’re not feeling well and you don’t understand your disease,” Smiths said. “It’s like drinking from a water hose, but it’s so important to know something about your disease.” Because everyone’s myeloma is different, they said patients should educate themselves on their type of myeloma and have a plan for when they relapse, something that almost every myeloma patient will experience. “A lot of people just put their head in the sand and say, 'I don’t want to know, I’ll figure out when it happens,'” Ahlstrom said. Smith relapsed about a year ago, but is in remission again. Ahlstrom, who was diagnosed in 2010, has yet to relapse. For patients that want to get involved in medical trials, it’s often difficult to get understand the medical jargon explaining the the research, so Ahlstrom sits down with the researchers and has them explain the trials in patient-friendly language. The explanations are then posted on myelomacrowd.org. As part of its research initiative, the group also crowdfunded $187,000 to fund two medical trials for immunotherapy treatments, something that’s not usually likely to receive funding. “We are sharing information, we are funding research, we are really moving the bar for our disease,” Ahlstrom said. For those recently diagnosed with myeloma, they recommend seeking out a specialist and for the patient to educate themselves about the type of myeloma they have, since patients typically have multiple types of myeloma cells in their blood. This Saturday, Myeloma Crowd will host a roundtable from 9 a.m. to 4:30 p.m. at the DoubleTree Suites, located at 110 W. 600 S. in Salt Lake City, to educate patients and caretakers on myeloma and treatment options. Time will be dedicated for a questions. Registration begins at 8 a.m. and costs $25.