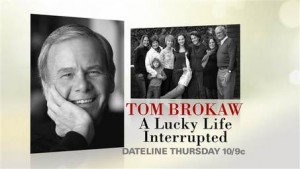 If you have not seen Tom Brokaw's Dateline NBC special of his multiple myeloma journey, you should. It may have done more to shine a light on a disease that has been invisible to the general population. A study in the UK uncovered only 3% of the public have ever heard of myeloma. Everyone has heard of leukemia and lymphoma, but not multiple myeloma, and myeloma is one of the three most common blood cancers. As a myeloma patient I believe this show is a must-see event.

One of the first things I came to understand is that the title My Lucky Life Interrupted is such an understatement, and Tom says maybe that was due in part to his Anchor Man mentality. His life was not just interrupted, it was saved. One in five patients die in the first two months after diagnosis. Two in 10 have what is called high risk myeloma, which has a two year life expectancy. First Tom had back pain and it was misdiagnosed as either age-related or just arthritis. Based on his pain, he had active myeloma and even with his resources and, I assume, excellent general medical care, he was misdiagnosed. In the headline he said his life was LUCKY, and oh how lucky it was because untreated myeloma has a life expectancy of just seven months. Soon after this misdiagnosis, he was lucky enough to go to the Mayo Clinic for his annual checkup, and a low white blood cell count, along with bone pain, raised a red flag to people at one of the premier health facilities in the world. A skilled and knowledgeable general practitioner scheduled additional tests, which resulted in the correct diagnosis of multiple myeloma. What if he had not gone to a Mayo Clinic but a local hospital for his checkup, like most people in this country do?  Would they have caught this or just chalked it up to an infection or arthritis? Some other interesting takeaways that I got from the interview were the following: I want to thank Tom for not keeping his illness to himself and his family, but helping to bring it out of the shadows. We need general practitioners to understand the symptoms and order the tests to diagnose this disease and save lives. If it can be found early, the American Cancer Society published data shows that a patient can live three time longer if myeloma is found in stage 1, rather than if it is found later in the disease progression or stage 3. Good luck and may God Bless your Cancer Journey. For more information on multiple myeloma survival rates and treatments CLICK HERE and you can follow me on twitter at: https://twitter.com/grpetersen1