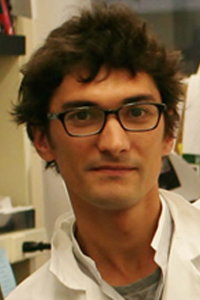 Myeloma patients with the 11;14 translocation may have a new, effective therapy in their myeloma arsenal. Dr. Cyrille Touzeau, MD of the Université de Nantes in France shared information with the Myeloma Crowd about a new therapy by Abbvie. The new drug, called ABT-199, targets the BCL-2 protein. BCL-2 is a key member of the family of proteins that control cell death. BCL-2 and other proteins (such as MCL-1) prevent cell death while other members trigger cell death. The balance between these proteins determine whether a cell lives or dies. According to Dr. Touzeau, BCL-2 is involved in cell survival and drug resistance in most cancer cells, and so it represents an attractive target for therapy. Results presented at ASH 2013 and ASCO 2014 showed very exciting response rates in CLL (even in patients with the 17p deletion) and in B-cell lymphomas, especially mantle cell lymphoma. Dr. Touzeau is hopeful the same exciting results can also be found in multiple myeloma patients. In his recent Leukemia paper, he found that the new inhibitor was particularly effective in vitro for myeloma cells with the 11;14 translocation. Why? It is not yet known.  Different types of myeloma may depend on other anti-apoptotic proteins besides the BCL-2 protein. The most important question to answer next is: How do we determine myeloma patients who may be the most responsive to the drug? Dr. Touzeau notes that simply expressing BCL-2 is not a good predictor of sensitivity to the drug. More important is the dependence on that protein, which depends on its relationship with its sister proteins, such as MCL-1. The ratio between the two proteins may be critical. Dr. Touzeau's current work in Anthony Letai's laboratory at Dana Farber Cancer Institute will be to measure the BLC-2 dependency of myeloma cells using a functional assay, called BH3 profiling, which can predict the response to drugs like ABT-199. His goal is to find the best biomarker that can be used routinely in the clinic in order to identify patients most likely to benefit. Dr. Touzeau mentions that results are still very early and that the two Phase I clinical trials now in place will be a major step to determine safety and optimal dosage of ABT-199 in myeloma patients.  The first trial is being run at five sites (Mayo Scottsdale, Mayo Rochester, Emory, Siteman and sites in France) for relapsed/refractory patients. The second trial is using ABT-199 with Velcade at the same sites.  Velcade has been shown to counter the MCL1 protein which has been associated with ABT-199 resistance, so there was strong rationale to combine the two. Although the results are early and more remains to be seen through the clinical trials, Dr. Touzeau is hopeful that ABT-199 will provide excellent results for patients with BCL-2-dependent myeloma.

The Impact of Diet on MRD-Negativity in Multiple Myeloma
Make a difference this Giving Tuesday
The Many Different Manifestations of MGUS
What to Do with MRD Results: Starting or Changing Myeloma Treatment
Finances in Myeloma Survivorship
Join Us In Celebrating Our 10-Year HealthTree for Multiple Myeloma Anniversary!
See More