At the American Society of Hematology (ASH) 2020 Thursday scientific workshop, Dr. Leif Bergsagel of the Mayo Clinic gave a short presentation on the “Role of Gut  Microbiota in Shaping Myeloma Evolution.”  Dr. Bergsagel cited several studies, most of which are outlined below, that form a definitive chain of evidence linking the microbes in the gut with both the progression of multiple myeloma and better myeloma outcomes.

Study 1 involved Vk*MYC mice. Researchers do not know how to give MGUS  to a mouse, however, Vk*MYC are mice that have been given a monoclonal gammopathy (MG) that will always progress into myeloma over time. Some of these mice were sent to Italy where they lived in a pathogen free environment. These mice were observed to progress from MG to myeloma at a much slower rate. Since that time this experiment has been duplicated in United States slowing progression even further through the elimination of pathogens.

Study 2 showed that mice pre-treated with antibiotics before being given (MG) mentioned above progressed to myeloma more slowly and lived longer than those not given the antibiotics.

Study 3 looked at Vk*MYC with faster progression to myeloma and it was found that their feces contained prevotella which is a microbiome bacteria associated with inflammation. Additionally, when mice that had not progressed were given prevotella, they progressed to myeloma more quickly and survived for a shorter time.

Study 4 showed that myeloma patients with more interleukin 17 (IL17) in their blood progress more quickly from MGUS to myeloma than those with less. It is hypothesized that there is a connection between microbes like prevotella and increased IL17.

Study 5 followed myeloma patients after transplant finding that those with higher levels of butyrate-producing microbiota, were more likely to have undetectable minimum residual disease (MRD) following the transplant.

Sorting out the good bacteria from the band is a tedious process that requires a lot more study. But Doctor Bergsagel was able to draw the conclusions shown in the following slide: 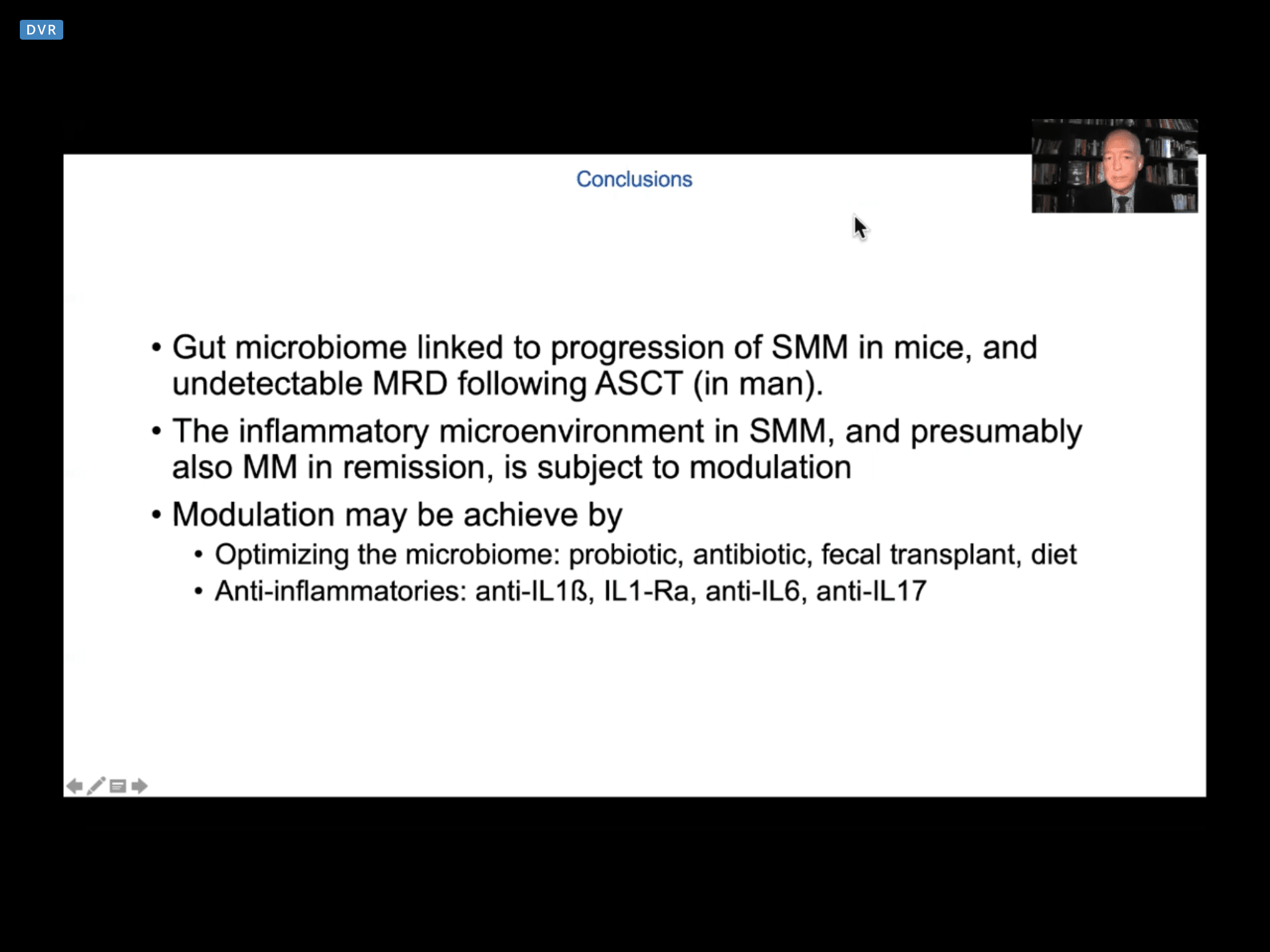 Following the presentation,  Dr. Bergsagel was asked, "What can patients do to improve their microbiome?"  He responded, “It would be so nice if we could tell them yes, if you eat yogurt you’ll establish a good microbiome.  But it’s going to take a lot of studies before we get there.”

Beginning to understand the connection between the microbiome and myeloma is the good news. If there is any bad news it is perhaps that the studies discussed today were not new. They took place as long ago as 2007 and only as recently as 2016.  If you search the 2020 ASH program for anything on microbiota you find very little.  This is where a platform like HealthTree could be used to run diet-based studies (one from Dr. Shah at Memorial Sloan Kettering is coming in 2021). And if you search on microbiota and myeloma together, you find only this one presentation. One wonders if it is perhaps because no one is likely to make a fortune by studying microbiota that research seems so slow. Then again maybe its just impatience on the part of  this very invested myeloma fighter who has admittedly been spoiled by the lightning speed explosion of myeloma research in the last several years.

One article I noted during my research had the following title: “Could the menagerie of the gut microbiome really cure cancer?”  All I can say is, wouldn’t that be something?

You can read more about myeloma and the microbiome from ASH 2019 here.