I often say that I am surprised how well versed myeloma specialists are in the nuances of this disease. I often say that they live and breathe myeloma and know so much about it that: “They don't know how much they really know”.  A case in point is Dr. Philip McCarthy of Roswell Cancer Institute. In a study which was published by Dr. Palumbo with many co-authors including Dr. McCarthy, it was noted that overall risk of secondary cancers was 3% with lenalidomide use and 1% without lenalidomide use. I asked him this question:

Gary Petersen:"Jenny had put on her site an article with regard to the use of lenalidomide and secondary cancers. You are also listed on that with Dr. Palumbo and a number of other people as co-authors. And in that short review I found that a melphalan-based therapy with lenalidomide, and I’m not sure it was that way, but it has 4.8% chance of a hematological cancer versus less than 1% without it, for melphalan without lenalidomide. Is that how I read that? And then if so, does the use of melphalan in a stem cell transplant create the same issue? Because we often use lenalidomide in maintenance induction and consolidation. So I’ve had stem cell transplants and did not use lenalidomide but a lot of people have, and I’m sure that would be a concern." 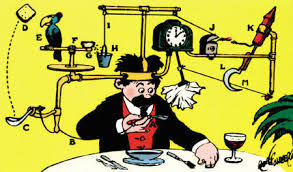 Sounds so complex to the patient, but not  to the myeloma specialist In answer to the first part of the question Dr. McCarthy indicated the incidence of hematological cancers is 4.8 times greater or 4.8% vs 1% for a treatment without lenalidomide. The answer to the second part was a little bit more involved. I will provide a cliff notes version of Dr. McCarthy's following response. Cliff Notes Version: Yes it is true, hematological cancers are greater, but the benefits of taking lenalidomide far outweight the risks. Long term use of low dose melphalan is a greater risk, and long term exposure is probably not a good idea. With lenalidomide maintenance past two years, secondary cancers return to normal levels so stopping too early may have more risk than benefit. Even untreated MGUS patients are developing other hematological cancers, so there may be other factors at play besides the medications. Please read Dr. McCarthy's answer below, and you will understand how truly knowledgeable a really skilled myeloma specialist must be just to understand multiple myeloma and how to treat it.

Dr. McCarthy: That’s complicated. So let’s start with the non-transplant. It appears that the prolonged exposure to low dose melphalan probably is – it appears to be bad especially when it’s combined with lenalidomide, and it’s interesting. When I first started out in fellowship, the original treatment for myeloma — well, the first treatment that really worked fairly well was melphalan and prednisone. And the patients would take it for four to five days every six weeks along with steroids with the prednisone and then repeat. And then what would happen is you would often end up with a damaged marrow after, say, 12 months of this treatment and just because the melphalan is toxic over time to the bone marrow. So it’s not that when you add lenalidomide to that, you increase that risk either sequentially or using it at the same time. So based on that article, we’re recommending that it’s probably not a good idea for prolonged melphalan exposure. Now, with regards to stem cell transplant, and then it gets really complicated. The one weakness, in fact, if you read the editorial on the Lancet Oncology, one of the weaknesses of the paper was that the IFM0502 data was not included. There’s a variety of reasons why that was. So that’s the French study. But if you compare the two studies, we both saw an increase incidence of second cancers, there’s about 3% versus 1% in the CLGB study and there is about 2.5%, 2.7%, 3% incidence – about the same thing on the French study. The thing that was different is in the French study, they saw about the equivalent amount of myeloid malignancies, so AML, acute myeloid leukemia or myeloid dysplastic syndrome. In the French study, they found increased incidence of Hodgkin lymphoma and acute lymphoblastic leukemia, which we’re all very surprised at because that’s not what you would have expected with alkylater melphalan exposure. Usually, you get these myeloid malignancies. And if you look at the treatments in the two arms, the induction regimens are very different. The IFM study had a lot more VAD which again, we don’t use, half their patients got that. The other half got bortezomib-dex. And then 100, 104, about 74% of patients either got thalidomide or lenalidomide-based regimens. And then a lot of the French more alkylating therapy with something they called the D-septin, about 20% of their patients got two transplants. So just keeping all that in mind, there are enough differences. The other thing is the French patients only got two years of maintenance, and they stopped because they were worried about the SPMs, the second primary malignancies. We did not do that in the states, and we saw this sort of increase and then it went away. So my feeling is that if you get out to two or three years and you haven’t had an SPM, you likely are not going to get one, and that you assume all the risk and potentially none of the long-term benefit by stopping lenalidomide maintenance too soon. The one thing also in the Palumbo paper sort of buried in there is that the risk of getting a second cancer is definitely higher with lenalidomide especially with low dose melphalan. But the risk of having progressive disease and dying from the myeloma was higher if you didn’t get it. So it’s sort of a risk-benefit thing. When you look at it, that’s still the risk of the cancer coming back as much higher without some form of maintenance therapy. Now, it should be bortezomib or lenalinomide, we don’t know, or should it be ixazomib, this new oral proteasome inhibitor? And we’re going to have to see based on just future trials. So that’s why I tell patients — one last point. It turns out that this entity called monoclonal gammopathy of undertermined significance, and those patients have an increased incidence of developing also acute myeloid leukemia or myeloid dysplastic syndrome, bone marrow problems, and they don’t get treated, and that was based on an Ola Landgren study, looking at a Swedish tumor registry. So we know that people who have this sort of disease, either smoldering myeloma, MGUS, that they’re not requiring therapy, they’re being monitored, they still have a higher risk of developing bone marrow disorder. So lenalinomide contributes to it, melphalan does, but there are other factors that we don’t understand enough to be able to tell us, “Oh, this is a bad risk patient, so we really shouldn’t expose him to this particular combination of drugs because they’re going to get leukemia.” We haven’t been able to figure that out yet, and that’s ongoing research we’re trying to sort that all out.