Multiple myeloma doesn’t play by the rules. Statistically speaking, people under the age of 55 are not supposed to be diagnosed with this rare blood cancer; and yet, my husband was diagnosed at the age of 53.

We were in a completely different stage of life than those in the average diagnosis age of near 70 years old. We were working full time with one son still in high school and another son with two years left in college.

Todd was in the best shape of his adult life. He was active -- hiking, surfing, traveling extensively for work; he had no pain; he was not sick; he was not fatigued; he never missed a well-check and his lab work always looked perfect. It was a small, egg-sized bump on his lower back that led him to his orthopedic surgeon. They both assumed it was just inflammation caused from running through an airport to catch a flight with a backpack slamming against that area but, just to be safe, an MRI was ordered. Two weeks later, on the day after Christmas, Todd met with his doctor and heard the fateful words, “you have cancer.” It was supposed to be a routine appointment, I was not even there. In other words, in my mind, I failed my first test as caregiver.

Once the shock of the first few hours wore off, we quickly transitioned into research, plan and attack mode. As type-A personalities who met in college and had been married for 28 years, that strategy had served us well over time in our careers and personal life but, now we were using it for Todd’s life. The pressure was on.

In a perfect world we would have had all the answers, or at least some of them, before we shared the news with our sons (ages 16 and 21 at the time) and the rest of the family. We did not have that luxury since everyone was in town for the holidays and phone calls would have been overheard and family plans needed to be rescheduled. Once we shared with one group, we felt compelled to share with others.

Soon, what started out of necessity, became a conscious decision. We decided cancer, or any other illness or problem, should not be hidden as if it was “a dirty-little secret” that you fight alone. We wanted to teach by example, showing our sons and others around us how to advocate for their health. To do this we needed to be open and matter of fact with our quest, encouraging questions and communication between everyone.

We shared that our plan was not to be passive participants in the process. We were taking a crash course in Myeloma 101 and actively pursuing the best next steps and welcomed their input. That decision worked for us and our circumstances with young adult-age children.

Twenty-two days after learning Todd had cancer, we met with a multiple myeloma specialist at City of Hope, and the next day he started treatment. The path from diagnosis to that point was anything but straight. We know now that some doors were closed in order for better ones to open, a valuable lesson we could only appreciate in hindsight.

The next six months continued along a path that did not exactly match the initial plan of attack we outlined in December. Initial treatments were changed, timelines were revised, and expectations were adjusted. Still, even with some setbacks, we were fortunate. Todd tolerated his treatment well. He never missed a day of work. In fact, work proved to be a great distraction and reward.

In the early days post diagnosis, he feared he would not be able to do his job, but in the weeks that followed, he found solace at work where he could focus on things other than cancer. He took pride in achieving goals despite the battle being fought in his body. The same was true at home. Even on treatment days Todd never missed one of our son’s hockey games, awards nights, family weekends, or any gathering with family and friends. 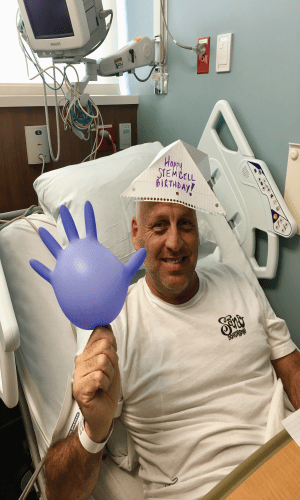 Diane helped Todd celebrated his stem cell transplant birthday by improvising with materials on hand to make a birthday hat and balloon.

For my part, I have never missed another doctor’s appointment or treatment. I learned to balance, and in some cases lower, my own expectations at home and at work. I learned to ask for help in the areas I need it, and graciously decline help I do not want. I now understand that people want to help, but it is up to me to share the ways I need help. I do not want casseroles left on my porch, as kind as the intention is, but someone stopping by to walk our dog in the middle of the day on long treatment days is a huge relief.

After my day-one failure as a caregiver, I am pleased to say that I have become a care partner in the truest sense of the word. Todd does not need, nor want, to be treated as a patient. In fact, other than during the time of his stem cell transplant, he does not appreciate any level of caregiving, but care partnering is different.

We believe that knowledge is power, and informed patients live longer. With that in mind we actively follow the research, we watch the videos, and we read the articles. We make decisions together and we both advocate for Todd’s health.

Statistically speaking, myeloma knocked on our door 16 or more years too early. If it had waited, our sons would have been out of college and possibly married with kids of their own. We may have been retired and enjoying a different stage of life. Myeloma did not play by the rules, but neither are we.

With the help of many, we managed to take something as bad as an incurable (to date) cancer diagnosis and use it for good – in the full view of everyone. We do not have control over the hand we are dealt, but we do have control over how we play it. Whether it is cancer, mental illness, unexpected job loss, or worse -- partnering with the right team and advocating for yourself and your loved ones puts the power back in your hands.

It has been four years since Todd’s diagnosis, and there have been many more good days than bad ones along the way. We have met amazing people – doctors, nurses, patients, and their families – who are all doing their part to find a cure.

We coach newly diagnosed patients and their families, lead a Southern California myeloma community support group of over 300 members, and are active in every way possible to find a cure for multiple myeloma. When thoughts of “why us” and “why now” have crept in our minds, we purposely flip them to “why not us” and “why not now.” We truly believe that the research being done today, with today’s myeloma patients, will lead to tomorrow’s cure. We plan to live long enough to celebrate that day! 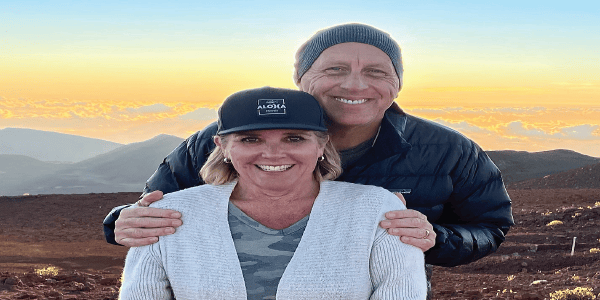 Todd and Diane enjoy hiking daily and traveling whenever possible. This photo was taken at sunrise at the Haleakala Crater in Maui in October 2021. 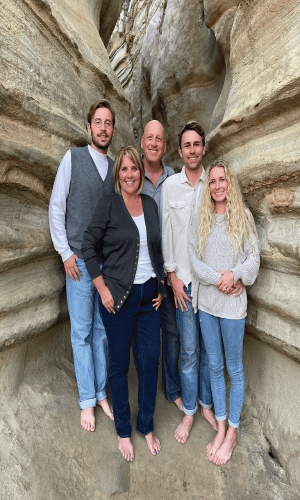 Todd and Diane have two sons and a soon-to-be daughter-in-law. The wedding is planned for May 2022.

Editors Note:  This is the first in a series of articles sharing perspective and issues facing individuals diagnosed with myeloma at a younger age.

About the Author:  Diane met Todd in college and they were married in 1989. They have lived and raised their two sons in Southern California. Todd was only 53 years old when he was diagnosed with multiple myeloma on December 26, 2017. They volunteer as Myeloma Coaches and are co-leaders of HealthTree's SoCal Myeloma Community Chapter.