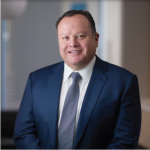 Rafael Fonseca, MD is the Chair of Myeloma at the Mayo Clinic in Scottsdale and recently shared a Twitter thread (of 26 tweets) that asked the question "What is the Risk Classification of the t(11;14) in multiple myeloma? He then told the story with examples and data of venetoclax - the first drug to show specific utility for myeloma patients with the 11;14 translocation.

The information that followed was so valuable, we want to share it here because many patients are not on Twitter. Twitter can be a little cryptic, so we've added some comments to help clarify certain points. Get ready for a great read, especially if you have 11;14 myeloma!

WHAT IS THE RISK CLASSIFICATION OF THE t(11;14) in MM? This has been a long-debated question and probably asked in the wrong way. I have always had a special interest in the t(11;14) and want to tell a story and how it relates to venetoclax. #mmsm #ASH19

That year I convinced M Gertz to send me to Leiden, Netherlands to study t(11;14) via fiber-FISH- most elegant FISH assay. Only achievable by the great Dutch masters. At my return M Kuehl said “stop wasting your time & start doing interphase FISH.” Best advice! @MorieGertz 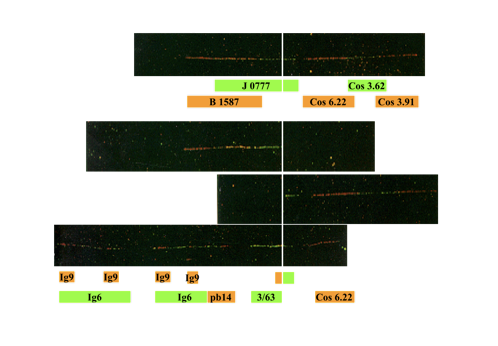 With interphase FISH we reported a prevalence of 15% of MM. It was associated with better outcomes (2003) and subsequently confirmed by others. KEY POINT: Most of the trials where it was tested had a backbone of alkylators and not any novel agents. https://ncbi.nlm.nih.gov/pubmed/12576322 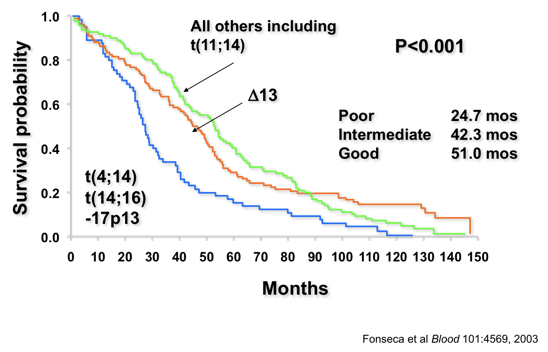 THIS IS AN IMPORTANT POINT: The t(11;14) is known to be associated with lymphoplasmacytic morphology and CD20 expression. Often hyposecretory or (non-secretory) and IgG lambda type. AGAIN KEY POINT: MM with t(11;14) often has scant cytoplasm (more later).

We had this theory called the “Donor Chromosome Theory.” It postulated all MM would have 14q32 translocations. This came after Kuehl, Chesi & Bergsagel had identified translocations as ubiquitous in cell lines & discovered the t(4;14) and t(14;16) https://pnas.org/content/93/24/13931/tab-figures-data… 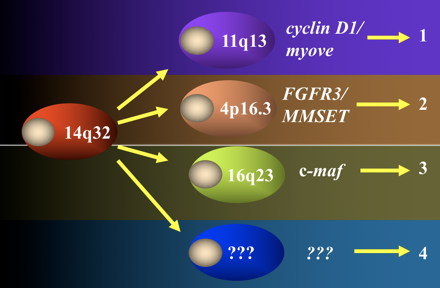 In 2001 Dr. Sue Hayman first reported a 50% prevalence in pts with light chain amyloidosis. It was also associated with strong nuclear positivity for cyclin D1. In 2003 H. Avet-Loiseau reported at a high frequency in IgM MM. https://ashpublications.org/blood/article-lookup/doi/10.1182/blood.v98.7.2266… https://ncbi.nlm.nih.gov/pubmed/12393502 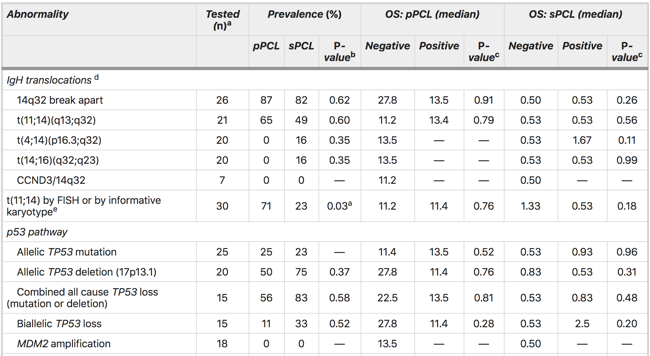 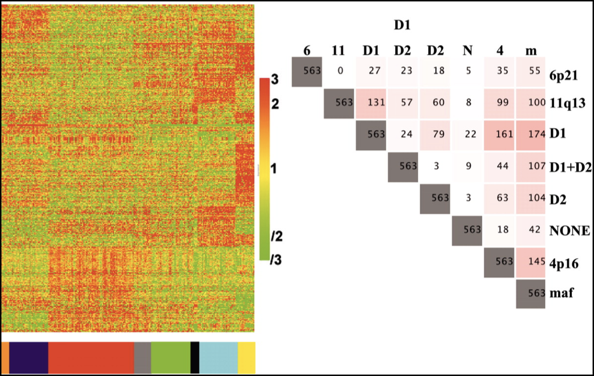 As time went by its prognostic significance seemed to worsen. Could this be related to the Rx used? While all MM outcomes improved it appeared the t(11;14) had stagnated. Lakshman showed inferior ORR, PFS, and OS compared with standard risk pts. https://ncbi.nlm.nih.gov/pubmed/28655925 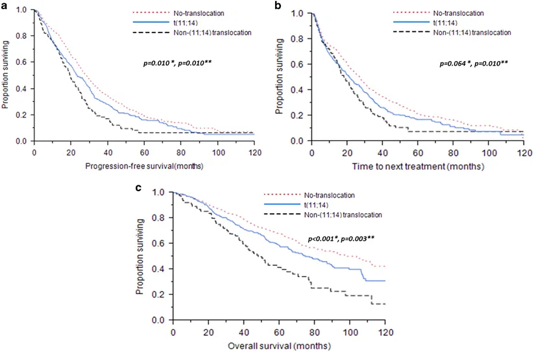 In a seminal observation in 2014 Boise proposed the “Tao of myeloma.” Hypothesis; effective treatments against MM could be built targeting NORMAL PLASMA CELL DIFFERENTIATION, not the genetic changes of the cells, but rather natural vulnerabilities. https://ashpublications.org/blood/article-lookup/doi/10.1182/blood-2014-05-578732… 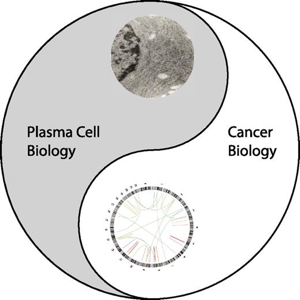 This explained why drugs like proteasome inhibitors are predominantly useful in the clinic for late B cells – myeloma and Waldenström, and to some extent in other B cells tumors - not much else. Dr. Tiedeman did some elegant studies in this regard. https://ncbi.nlm.nih.gov/pmc/articles/PMC4118579/…

But what about IMIDs? While IMIDS have pleiotropic effects not until recently it was shown that the protein context matters. The group of Florian Basserman showed the chaperon effect of IMIDs & effects on lactate metabolism. https://ncbi.nlm.nih.gov/pubmed/27294876 https://ashpublications.org/blood/article/130/Supplement%201/SCI-9/83616…

During protein folding lots of ROS are produced, and our group showed that IMIDs inhibit detoxifying mechanisms (TrxR). In this case the cells “self-poison.” But to be effective there needs to be abundant protein folding. https://ncbi.nlm.nih.gov/pubmed/27294876 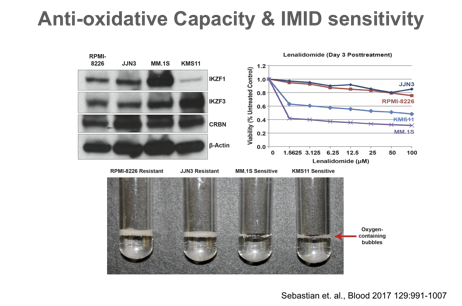 Again IMIDs primarily work in MM, WM, some lymphomas and the only other disease is the 5q- MDS. Again the protein context is essential. Remember MM with t(11;14) is lymphoplasmacytic with scant cytoplasm. https://nature.com/articles/2403091… 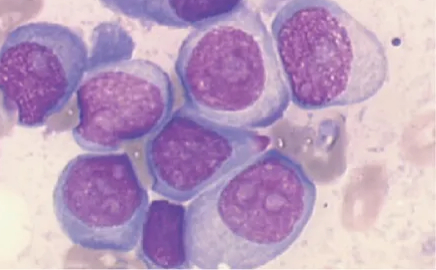 How is this related to the t(11;14)? If the cells have less cytoplasm, due to less proteins = less ER stress potential, and thus lower effect of PIs and IMIDs. Thus these drugs work better in “plump” mature plasma cells like in hyperdiploid MM, rather than in t(11;14).

And then came venetoclax! Investigators showed that venetoclax showed great promise in MM with the t(11;14) as this genetic subset depends more on anti-apoptotic signaling (pro-survival to avoid the double negative) of bcl-2. https://ncbi.nlm.nih.gov/pubmed/29018077 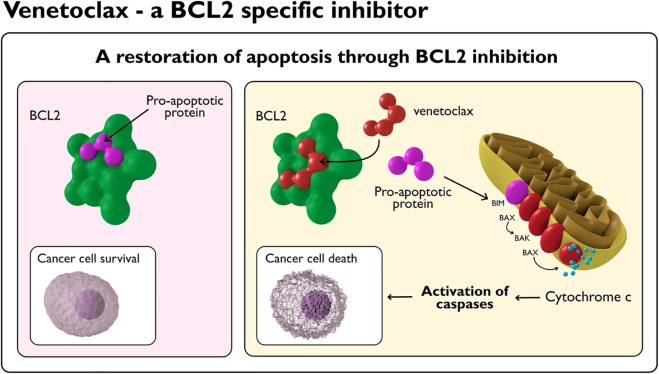 Again, the work of Drs. Boise, Bahlis and Neri has shown that both t(11;14), and perhaps also elevated level of expression of bcl-2 predict a better response to venetoclax. This is truly the first targeted Rx for a specific genetic subset of MM. https://twitter.com/Rfonsi1/status/1204181561219977216?s=20… 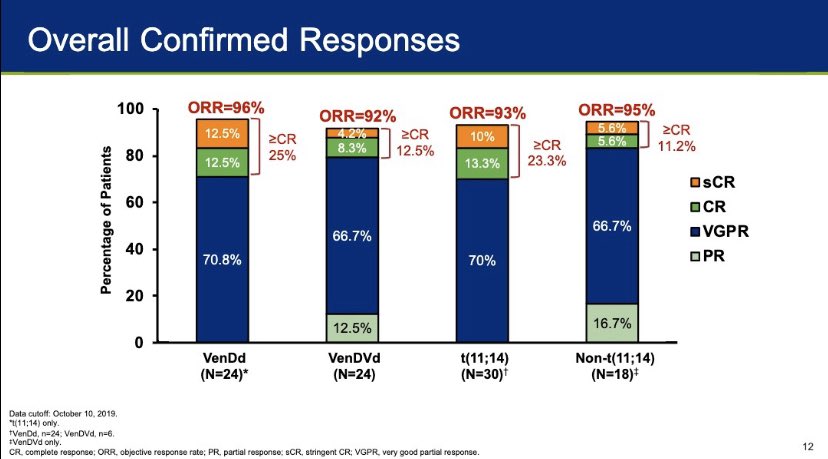 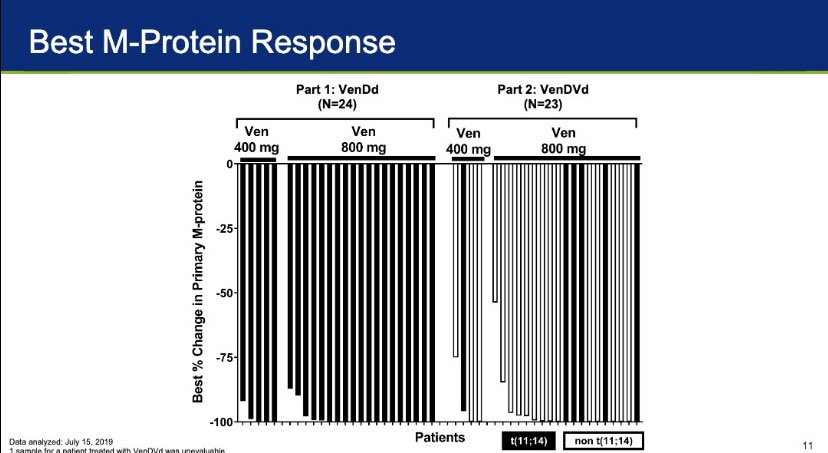 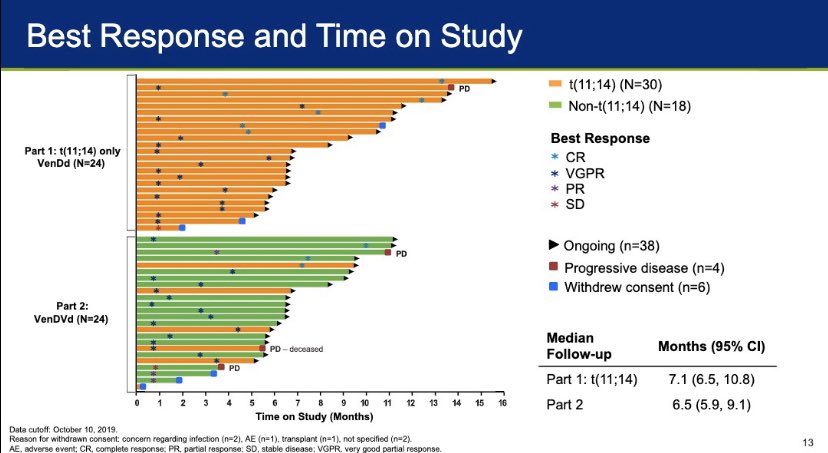 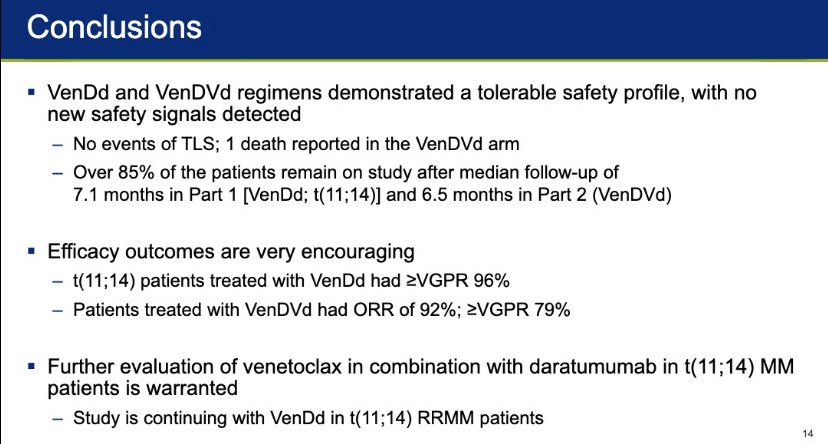 So what happened with the BELLINI trial? In hindsight this trial had a major flaw- venetoclax was tested without selection for t(11;14). Given increased mortality, the trial was stopped, and the FDA paused venetoclax development. https://fda.gov/drugs/drug-safety-and-availability/fda-warns-about-risks-associated-investigational-use-venclexta-multiple-myeloma… 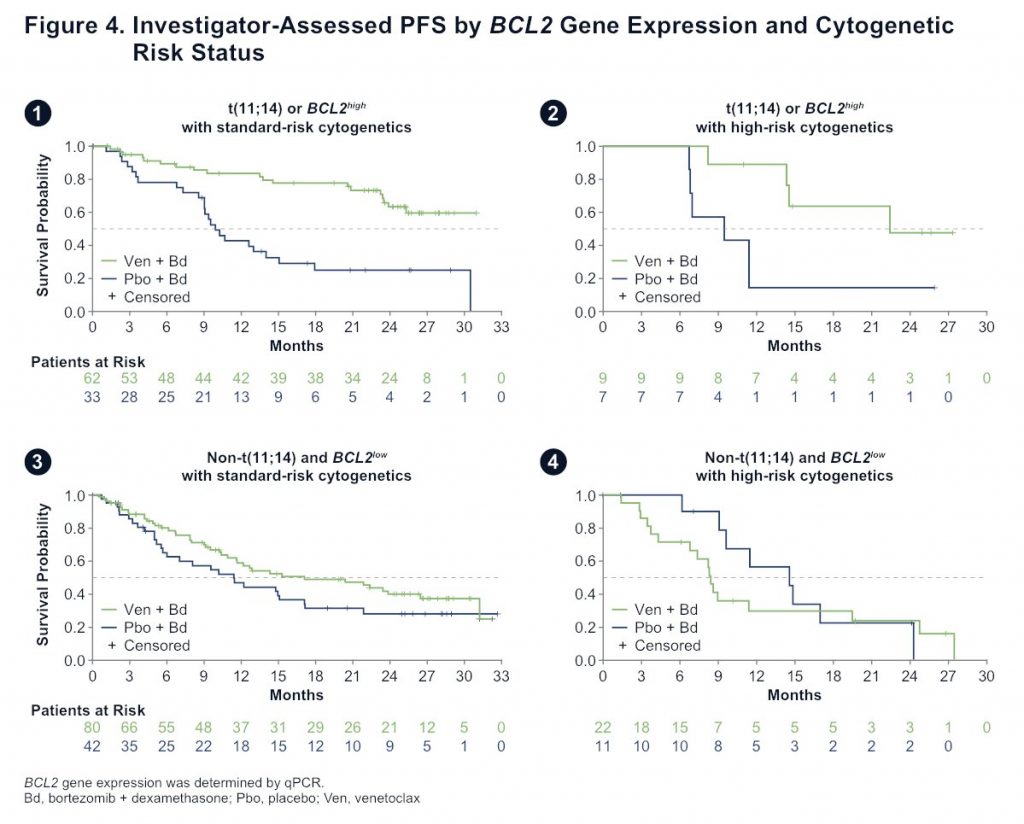 So the theory of the Tao of myeloma holds and we have now a targeted therapy for MM with t(11;14). If you do not have enough proteins the PI/IMID combination will work, but “not as well.” We urgently need FDA approval for this indication. 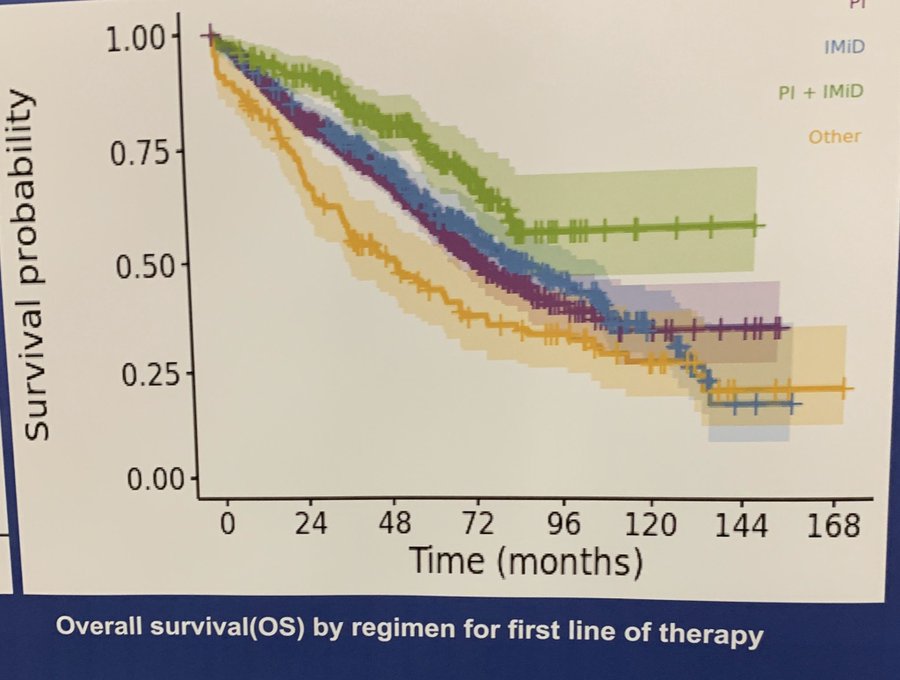 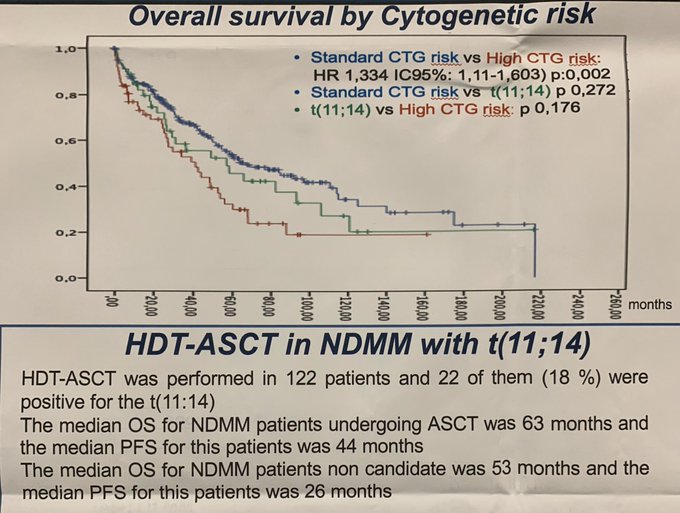 How about Rx of AL? Indeed, in AL the presence of this translocation is a negative prognostic marker for CyBORD treatment. In AL it is particularly important to achieve very deep responses (CR, nFLC). So clinical trials are urgently needed and ongoing for venetoclax in AL.

The same is true in pPCL (primary plasma cell leukemia). In patients with t(11;14) the addition of venetoclax is being tested in trials. Again another instance where very deep responses are needed.

In the setting of RR MM venetoclax is being tested in combinations. L Boise tells me that at a minimum it always should be started in combination with dexamethasone, but I think more is needed. Trials testing combos with bortezomib, carfilzomib and daratumumab are ongoing.

So in the end it is not about risk status. It is about a different biology and the correct treatment. Much like having a student who does not do well in school and you only later realize he needs glasses. The end!

If you have 11;14 myeloma or plasma cell leukemia, join HealthTree, where you will be able to connect with others with the same genetic features using our Twin Machine technology. www.healthtree.org.