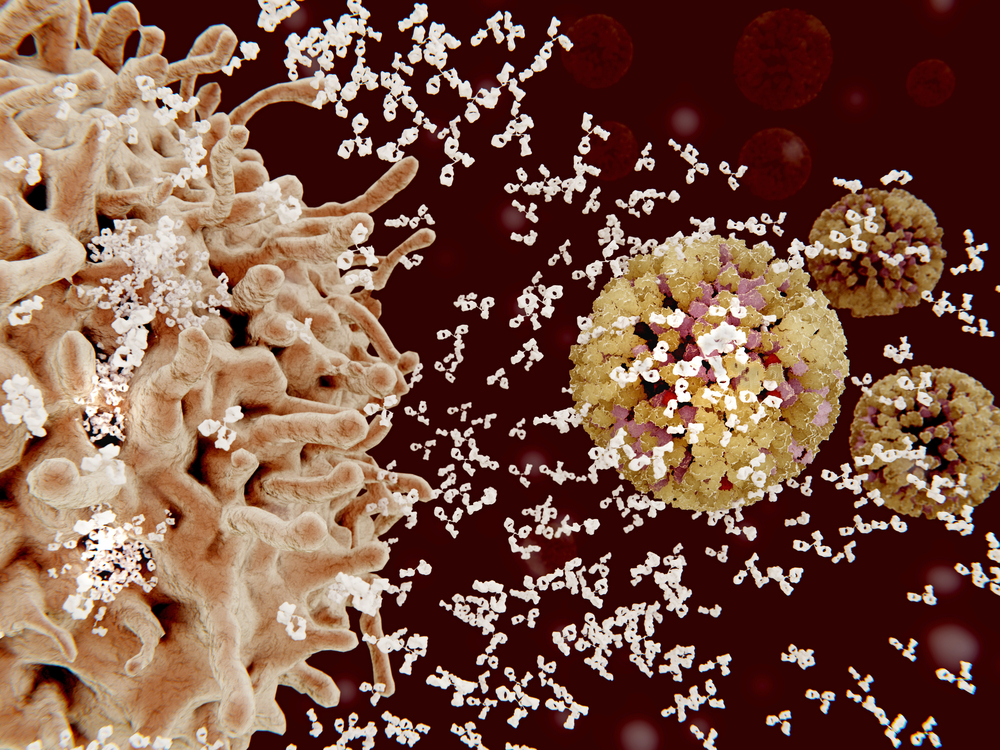 "The cell surface is basically coated with sugars,” says Carolyn Bertozzi, a chemist at Stanford University. “They’re what viruses, bacteria and other cells see first when they touch down on a target cell.”

The sugars that attach to cell-surface proteins are elaborate in their structure. Although much research has been done on other cellular building blocks (proteins, lipids, etc), work on sugars has lagged. Bertozzi is using these new insights to potentially discover new classes of cancer drugs, including immunotherapies. Today's immunotherapies like PD-1 and PD-L1 checkpoint inhibitors block the interaction between PD-L1(light green) on tumor cells and PD-1 proteins (teal) on T cells. They take the brake off the immune system so it attacks the tumor.

A new wave of therapies could target parallel interactions between sialic acid sugars (orange) on the tumor and sugar-binding Siglec proteins (purple) on natural killer cells and other innate immune cells.

NICOLLE RAGER FULLER Instead of targeting proteins that reside on the surface of myeloma cells (like monoclonal antibodies or checkpoint inhibitors), this new wave of therapies targets cell-surface sugars. This would activate an entirely different part of the immune system to fight cancer. The surface sugars, called sialic acids, can mark the cancer cells as "self" cells, giving the immune system the signal to ignore them.

Cancer tissues have extra sugars that bind to the protein Siglec-9 on natural killer cells and so quiet the immune response. To our defense system, cell-surface sugars are a molecular fingerprint, telling a roving immune cell, “This one’s OK. Move along,” Bertozzi says. Certain pathogens, such as the bacteria that cause gonorrhea or streptococcal infections, have taken advantage. They coat themselves with sialic acids to hide from the immune system. Several years ago scientists wondered if tumors might use a similar trick. “We thought, ‘if bacteria are doing that, maybe cancer cells do too,’ ” says glycobiologist Ajit Varki of the University of California, San Diego.

Bertozzi noticed that sialic acids cluster in strange ways on the surface of tumor cells. Her early research in the 1990s was put on the back burner until she came across a 2010 paper in the Journal of Immunology where Israeli researchers used chemicals to cause tumors in mice with weakened immune systems.

Tumors growing in these animals had lower levels of sialic acids, compared with tumors induced in normal mice. In separate experiments in lab dishes, the researchers stripped sialic acids off the surface of tumor cells and saw natural killer cells wake up and attack the cancer. To the researchers, the connection was stunning: Sialic acids seemed to protect tumors from the immune system.

A group of 14 proteins known as  “Siglecs,” now make up this group of immune cell molecules that bind to sialic acid sugars. They acted like a cloak of invisibility to the immune system, hiding the tumor cells from the power of the natural killer cells. Bertozzi also tested adjusting the levels of sialic acid on the cells. When sialic acid levels increased, the NK killing function no longer worked.

There are far more sugars than proteins on surface molecules, but are much harder to study because of their exponential level of complexity.

Both proteins and sugars adopt three-dimensional shapes to do their work. Once researchers have a protein’s genetic blueprints in hand, they can predict its structure. Sugars, on the other hand, have no clear templates. A sugar’s shape and structure are determined by a sequence of enzymatic reactions that can be hard to predict. Different cells turn on different sugar-modifying enzymes, so the same sugar can adopt a range of conformations.

Bertozzi is using the drug Herceptin (used in breast cancer) to get the sialidase to focus only on the tumor cells. Her team is iterating to fuse antibodies with human sialidase. Other research shows that a protein frequently covered with sugars called MUC1 is also found in tumor cells, so MUC1 may be an attractive target. (MUC1 is found on multiple myeloma cells and is currently the target for a new myeloma vaccine by Israeli researchers.)

The under-the-radar work on sialic acids over the last few decades may have exposed just the edge of a dense forest. It’s likely that other sugars also form cloaks to shield tumor cells from immune attack, Bertozzi says. Translating such insights into actual therapies will require biologists to jump into the sugar fray and venture deeper than ever before. Bertozzi is hopeful: “We might be on the cusp of entering that phase.”