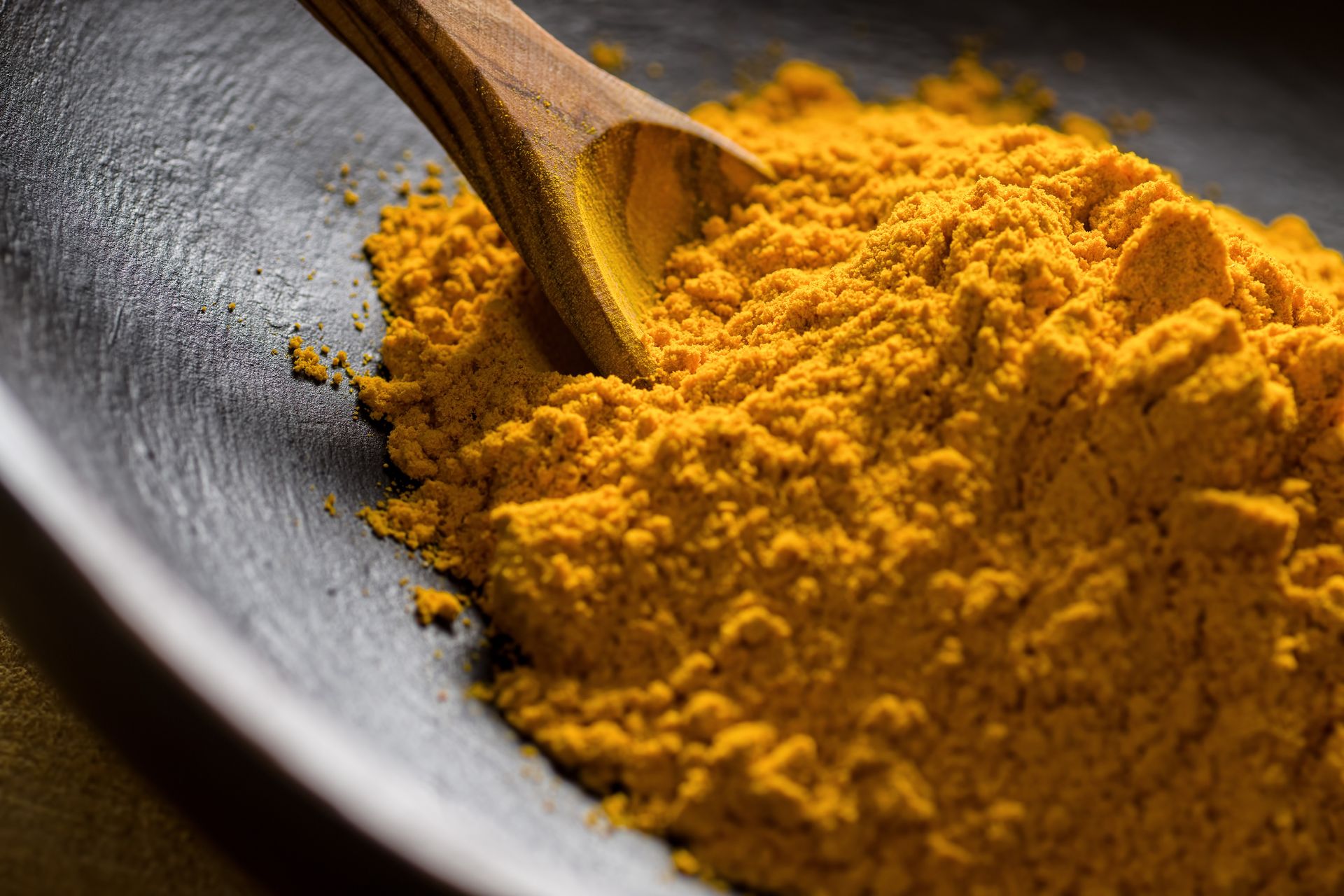 BY LIZZY SMITH As always, discuss with your doctor prior to making dietary changes, adding spices to your foods, or taking supplements. From the start of my myeloma journey, I have read up on nutrition, like which foods, vitamins, essential oils, spices, and the like are good for treating a whole host of ailments. One that keeps popping up is turmeric. I sort of vaguely knew what turmeric was before getting sick. It had something to do with flavoring Indian cuisine. Since then, I've incorporated turmeric/curcumin supplements into my daily vitamin intake and use the spice liberally on my cooking. But before we get to how to use it, let's do a quick re-cap of some of the information I've stumbled upon regarding this powerful and delicious spice. What is turmeric/curcumin?

Turmeric is a spice made from grinding the roots of the Curcuma longa plant, also called curcumin. It is a prime ingredient in curry powder, which is common in Indian and Asian cuisine. The active ingredient in tumeric is curcumin and can be taken in powder or pill form. You can spot turmeric by its distinctively rich, vibrant yellow color. Turmeric and multiple myeloma

I've read so many articles touting the powerful benefits of turmeric for the cancer patient, specifically myeloma. Here are a couple examples... From Oncology Nurse Advisor:

Hybrid compounds formed from structural features of the antinausea agent thalidomide and curcumin, an active ingredient in the common kitchen spice turmeric, destroyed multiple myeloma cells in recent lab experiments. A team led by Shijun Zhang of the Virginia Commonwealth University (VCU) School of Pharmacy in Richmond, Virginia, designed the hybrid molecules. According to information in a VCU statement accompanying the release of the findings in Organic & Biomolecular Chemistry, laboratory studies have shown that curcumin inhibits the formation of cancer-causing enzymes in rodents. Thalidomide was reintroduced into use in the late 1990s as a treatment for multiple myeloma, after being taken off the market in 1962 because it was found to cause birth defects. Zhang noted in the VCU statement that thalidomide disturbs the microenvironment of tumor cells in bone marrow but that the drug disintegrates in the body. Curcumin is limited in its anticancer activity by its poor water solubility. However, “The combination of thalidomide and curcumin in the hybrid molecules enhances both the cytotoxicity and solubility,” explained Zhang. The hybrid compounds exhibited lethal effects on cell models of human multiple myeloma, and the combination of curcumin and thalidomide was significantly more potent than either agent alone. The investigators concluded that the curcumin-and-thalidomide hybrid should be studied further as a treatment for multiple myeloma.

From The Myeloma Beacon:

In multiple myeloma and the precursor condition monoclonal gammopathy of undetermined significance (MGUS), cell culture studies and one animal study have shown that curcumin can kill cancer cells and prevent them from multiplying. The Beacon also found two early-stage clinical trials studying curcumin’s effects in people with multiple myeloma and MGUS.  Their results were promising, but not definitive. All of the studies discussed here suggest that curcumin is relatively safe. In India, where turmeric is used extensively in cooking, the average person consumes 60 to 200 mg of curcumin through his daily diet, according to the National Institutes of Health’s Medline Plus. Studies in myeloma cells and in mice Several recent lab studies have demonstrated that curcumin kills myeloma cells and increases the effects of conventional drug therapy: Clinical trials Clinical trials on curcumin’s effects on people with multiple myeloma or MGUS have also been promising, but thus far the evidence is limited to small, preliminary studies. The Myeloma Beacon found two such studies.

I do not know if taking loads of turmeric will stop myeloma from growing or can "cure" it, but my thought process is this: If my doctor assures me that it won't negatively interact with my current treatment regimen and drugs, why not? And this is an easy one for me to add to my daily routine. Why? Because I've come to love the taste of the spice and getting supplements (and taking them) is a breeze for me. How to use turmeric These days, I use turmeric often. I put it on my veggies, in soups, and even in guacamole. The other day, I scrambled up eggs. First, I sautéed mushrooms, spinach and even added pistachios. Next came my eggs and a little cheddar. When it was done, I flavored it with a pinch of sea salt and, you guessed it, a dash of turmeric. It was delish! I even added it to tuna for a sandwich that I loaded up with spinach and tomatoes. A friend of mine swears that it tastes great on popcorn, though I haven't tried it yet. I also take a curcumin supplement every morning with breakfast and evening with dinner. I have purchased the supplements at Costco, Whole Foods and, today, on Amazon because I didn't feel like heading to the store. Recipe: Cuban-style Black Beans and Rice I recently came across this recipe from The American Cancer Society. So easy and inexpensive (side note: I don't use canola oil, I swap with either fractionated coconut oil-- which adds a fun twist of flavor-- or olive oil). Ingredients: Canola oil, 1 tablespoon Red onion, finely chopped, ½ cup Garlic, minced, 1 tablespoon Ground cumin, ¼ teaspoon Dried oregano, ¼ teaspoon Sea salt, ¼ teaspoon Black beans, cooked, 3 cups, or 2 (15-ounce) cans black beans, drained, liquid reserved Bay leaves, 2 Brown or white rice, cooked, 3 cups Extra-virgin olive oil, 6 teaspoons 1. Heat the canola oil in a large, heavy pot and cook the onion until translucent. Add the garlic, cumin, oregano, and salt. Sauté for 2 minutes. 2. Add the beans and bay leaves. If using canned beans, add a small amount of the liquid along with the beans. Cook for 5 to 8 minutes on medium heat. 3. Remove the bay leaves. 4. To serve, put about ½ cup of cooked rice on a plate and top with ½ cup of black beans. Drizzle 1 teaspoon of olive oil on the top. 6 servings