Twitter fascinates me. I started using Twitter out of boredom one day after I heard Hoda and Katie Lee of the Today Show suggest that people follow them on Twitter. At first I was very confused, especially with hashtags #s and @ signs. It takes awhile to learn to read a tweet! Then I realized hashtags were a way to mark an important idea in a tweet and make your tweet searchable.

I started searching twitter using different cancer related hashtags and kept stumbling upon #BCSM. I did a google search and discovered #BCSM stood for breast cancer social media. I decided that myeloma needed a hashtag too!

Around the same time I saw a tweet from Dr. Thompson that sparked my interest.

I tweeted Dr. Thompson telling him I was ready to help him use social media to promote clinical trial accrual. That started the ball rolling for first Tweet Chat. I registered the #MMSM on Twubs which we used as a platform for our first chats. (Www.twubs.com) I also promoted and co-hosted the chats.

Dr. Thompson and I now lead the myeloma tweet chat discussions and over the past year, have created tweet chats on topics including: the best induction therapy, allogeneic transplants, race and myeloma, myeloma clinical trials, a cure for myeloma, amyloidosis, MRD, myeloma risk assessment, crowdfunding for myeloma, patients as advocates and panobinostat.

Now it's your turn to tune in. Two large tweet chats for myeloma are coming up in the next few days: 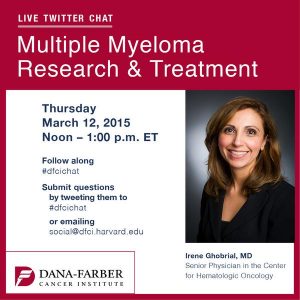 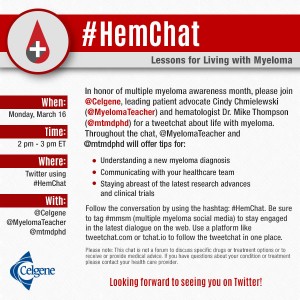 To join these tweet chats, go to your Twitter account and search on the #hashtag used for the event. Then when you add tweets using that #hashtag, your comments will be included in that tweet chat.

To learn more about the history of our tweeting, read the ASCO Connection blog. Many patients with multiple myeloma and thought leaders on this disease have contributed to questions and discussions and we look forward to furthering the myeloma conversation via Twitter!